Staying Out of Bookstores

[This was written in response to Paul Cipywnyk's "Where the Ink Meets the Road: Insights from Working in a Bookstore" posted in The Editor's Weekly the official blog of Editors Canada, Canada's national association of editors, Nov 15, 2016. http://blog.editors.ca/?p=3956] 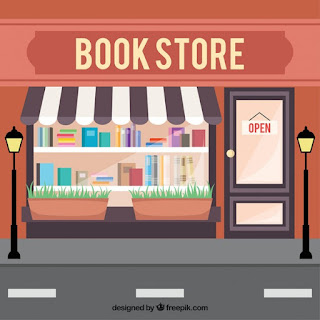 I used to love going into bookstores; now I mostly find them depressing.

As an acquisition editor, I am depressed knowing that the fabulous books I have acquired and edited are not even in the store, because the Indigo/Chapters/Smith/Coles monopoly chain made the decision not to carry independent publishers anymore, when it switched 50% of shelf space from books to cute stuff, because books weren't selling enough. Thankfully, the micro publisher (60 titles and growing!) I work for saw that coming and therefore survived that change when many other Canadian small presses folded overnight when they suddenly found themselves—not just effectively shut out of brick and mortar stores—but faced with six figure bills as their entire inventory was returned to them in one ruthless weekend.

As a critic and reviewer, I'm depressed when I see rows and rows of books in the SF/Fantasy section devoted to TV and movie series; to series written to a single formula; to the exact same book written by dozens of different authors all trying to catch the current fad by writing the predictable processed cheese designed to appeal to the lowest common denominator among consumers. It often feels like the big five publishers are so focused on predictable sell through that they have given up on taking risks, on caring about quality and innovation and promoting new authors. I know that perception isn't accurate, because I've met some of the editors at those big houses and they are fine upstanding individuals who love books as much as I do, and who are doing their best in a tough business. But I miss the days when presses were small and when the acquisition editor and the developmental editor were the same person and made the final decision based on their own tastes and gut feelings without having to worry about shareholders and the marketing department. When publishers were brands that readers could seek out to know that the editor shared their tastes and the reader could buy an unknown author or a new concept because they could trust the editor. Now the consumer can mostly trust that they won't be challenged by what they choose, won't have to think as they read, and will only feel what they've always felt reading the previus 80 Star Trek (or whatever) novels. As a writing coach, I am depressed because 95% of those who approach me for instruction want to know how they can become best sellers, how they can lose their voice and sound like every other author in the store. They want to know which of the current fads they can write to; or, better yet, can I tell them the secret of what the next fad will be. Or, how can they write like a 'gay person' (sic, I quoting here) or 'write black' or First Nations because so many writers guidelines these days say the publisher is open to/especially looking for LGBTQ/diverse authors, and these clients get upset with me when I raise about cultural appropriation. Or, I have to tell them to stop trying to be Margret Atwood (if they have graduated from university creative writing programs) or Robert Sawyer (if they are trying to write commercial genre fiction) because we already have Marget Atwood and Robert Sawyer and what we really need instead is their unique voice and their unique perspective and insight. And then we both get depressed when they ask me, 'Will I be able to make a living writing as myself' and I have to answer, 'Probably not, no'.

As an author, bookstores depress me because as I look around at the thousands of titles on the shelves—even ignoring all the processed cheese clogging the space and only looking at the authors I respect because they are pushing boundaries or allowing their uniquely Canadian voice to guide their writing—even if I just look at the books I love, there are so many more here (just today, not even talking about the turn over month to month—all those pallets of new books arriving each morning that Paul unpacks) l can never hope to read them all. If I cannot possibly buy and read all of their wonderful books, how I can I possibly expect anybody, anywhere, EVER to read my poor effort?

Not that my book is likely to ever end up in an actual brick and mortar store.

Most depressing of all, I can't remember the last time I actually went into a brick and mortar store. (To buy a book, I mean. I remember when I bought my daughter a leather bound notebook, and when I got the wife a coffee mug, and—well, you get the idea.) But I mostly read on my Kindle app or my Kobo, and when I finish a book, up pops a link to the next book by that author; or I take five minutes to search online for another title from CZP (the last great independent publisher in our genre) or from one of the small presses I follow because I know the editors, know the innovative fabulous work they are doing and know I won't find any of their books in the bookstore.

Don't get me wrong: "Where the Ink Hits the Road" is a great piece, and authors and editors should indeed occasionally visit bookstores to check out the real world of publishing. That there are still bookstores and readers at all is a positive thing! Not trying to argue that bookstores are out of date or that big publishers are evil or anything of that ilk. That would be nonsense. (I may be envious, but I'm not delusional, as some commentators on these issues appear to be.) Rather, just saying that we need to be careful when examining where the ink hits the pavement that we don't twist ourselves out of shape trying to figure out how to sell out to get a piece of that action. One should always start from one's own voice (or the client's voice, if you're the editor) and look for the market where that book belongs, and not start from the market and try to fit one's voice to it. The number of writers I've known over the years who've tried to write that Romance or SciFi novel to earn the big bucks, and failed miserably because they didn't even read romance themselves or know SF isn't not called scifi by anyone in the field, far exceeds the number (zero) who made that work for them. The authors I know who became successful all kept to their own voice and only became "overnight successes" after twenty years of nonstop effort to become the best writers they could become, ignoring fads and get quick rich schemes.

And who managed not to get so depressed about bookstores, and the economic realities of modern publishing/distribution, to give up writing completely.