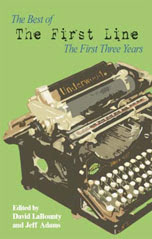 I thought I would mention a fun market for short story writers, especially if you're blocked. The First Line Literary Magazine is an American market that pays up to $50 and does not charge reader fees. (The one catch is if you want a hard copy of the magazine and you're in Canada, you have to pay $15 for mailing, so if your's is a shorter submission and only earns $15, you might end up having to choose between a copy of the magazine or the $15.)

The two things that make First Line attractive, however, are (1) they're very nice, very professional (e.g., accepted authors are sent proofs before it goes to print so you can see any changes--they caught an embarrassing typo of mine, for example, and made some sensible line edits) and have been around for a long time, so you don't have any worries about dealing with them; and (2) they give you the first line of the story which cannot be altered in any way. That's the whole concept of the magazine. Every story in every issue starts with the same line and it is totally fascinating how different authors' minds take that line in totally different directions. Fun, right! It's a great way to give yourself a little writing exercise by writing a story to that one line, and see what comes out. Some times my regular cast of characters elbow there way into this spontaneous exercise and I suddenly have yet another story in their growing collection. Other times a completely new character /situation comes to mind, and I'm off and running. Either way, it's a break from my WIP and kicks any writer's block you may have to the side. And they are often wicked-good first lines! The sort of first lines you wish you'd thought of.

I've written four stories for the magazine so far: two have been accepted for publication, one is awaiting the submission period for that particular first line (they tell you the year's worth of first lines ahead of time) and one they rejected. I didn't mind getting rejected at all. Because my story was up against hundreds of other stories with the exact same opening! How could you take that personally? (When any magazine rejects your story, it's often because they already have a story for that particular niche, not necessarily that they didn't like your story. With this magazine, it's all that niche!) And, I was able to place that story (with just a very minor change to the opening line) to a different market a couple of weeks later.

As a writing exercise, it's hard to beat, and if they publish your story, you're in pretty good company and its great fun to see how other writers approached the same starting point that you had. It really opens your mind to possibilities.

If you are ever having trouble coming up with ideas or just want a break from your WIP, I highly recommend it.