The Editor is Not You Enemy

I have a guest editorial on Writer in Residence today (Sunday, March 27). Brief discussion of acquisition editors; Tuesday I expect to do a second editorial on development and copy editors.
Posted by Robert Runté at 8:56 PM No comments: 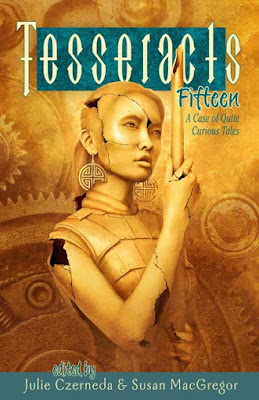 Was pleased to learn that my short story, "Split Decision" has been accepted for publication in Tesseracts Fifteen: A Case of Quite Curious Tales, edited by Julie Czerneda and Susan MacGregor, (from EDGE Science Fiction and Fantasy Publishing, ISBN 978-1-894063-58-6; $15.95).

The Tesseracts anthology series has always been considered the top market for Canadian SF, so I'm pretty pleased that I got in the first time I submitted. I am trying to find time to do a bit of my own writing, rather than just always editing other people, but most of that energy has gone into my novel. This was the first short story I've sent off in years, so getting a sale right off is very encouraging.

It was especially encouraging given that this year's editorial team are editors whose work I have always admired. Julie Czerneda is mostly known for her own novels, of course, but she has also become a top editor of anthologies and texts for the school market. And Susan MacGregor is not only one of the driving forces behind On Spec magazine (the longest running Canadian SF magazine), but the editor behind the Divine Realms anthology of Canadian spiritual SF. (Not, as it turns out, an oxymoron!) I have to say, one of the things that keeps Tesseracts on top is Edge's ability to choose first rate editors for each annual; that, and choosing interesting themes. This year's them was YA SF, and choosing someone like Julie Czerneda, who is so active in the promotion of science and SF in schools, and Susan MacGregor, one of the editors behind the first On Spec special Youth issues, is just genius. So it is pretty exciting to be part of it all.

Email ThisBlogThis!Share to TwitterShare to FacebookShare to Pinterest
Labels: my writing, short stories

Another article on e-publishing

Nothing much new here, but interesting to see mainstream press starting to catch up with phenomenon.
Posted by Robert Runté at 10:18 AM 1 comment: