Signed a new author for Five Rivers yesterday that I've been stalking for a long time.... So happy! Brilliant, brilliant book. I'm sure it will be the author's breakout novel; just the best thing I've read in years.

Adrianne Kerr (editor of Commercial Fiction at Penguin Canada) said on a panel a couple of conventions ago that acquisition editors these days can't just sit at their desks and wait for great manuscripts to come in over the transom, they were increasingly expected to go out and find them. I thought she just meant combing the big sellers among the self-published novelists for something that might be worthy of bookstore distribution, but I think now she maybe meant something a little more complicated... I know it took me a long time and very deep roots in the speculative genre to hunt down this book. The manuscript had been sitting in the author's bottom drawer for years. Finding that...feels like the greatest coup since Carr scored Rite of Passage for his Ace Specials series. So feeling pretty good today!

And if that wasn't the end of a perfect day, next up on my agenda, editing a brand new Dave Duncan novel! Whoohoo!

And three more solicited 'possibles' sitting on the editorial assistant's desk, awaiting her judgement; a nonfiction monograph due back in from revisions at end of the month; and the first of a two book deal with another new writer who hung onto the movie rights because, yeah, that one could be a successful movie....

Never thought there could be a better job than professoring...but editor is giving it a good run for the money.... 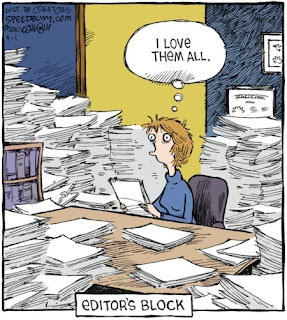 Word on the Street, Lethbridge 2015 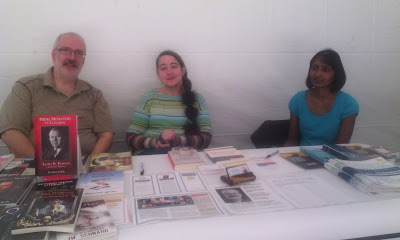 This year I took a table at Word on the Street, Lethbridge, because, why not, eh? I divided the table up: half for a book display from Five River Books; half for Editors Canada (formerly, The Editors Association of Canada), and a bit in the middle with business cards and an 8X11 sheet for SFeditor.ca.

Editors Canada/Bluepencil Café I had the Editors Canada banner and flyers left from last year's WoS and at Barb Geiger's suggestion, organized a Bluepencil café at that end of the table with a couple of extra chairs I brought from home. People signed up for 15 minute live edits of the first two-three pages of their manuscripts with one of the local members of Editors Canada and/or Barb (since she was sitting there and is arguably the best fiction editor of us all). We had almost no publicity for the bluepencil café because I only decided to take a table at the last minute and so didn't get into the WoS usual publicity channels, just a single post on Facebook, but we still had a decent number of takers: eight or nine I think, though not all of them remembered to sign the sheet. That was loads of fun, particularly in those instances where we had an opportunity to have more than one editor provide feedback. I was somewhat in awe of Barb, for example, who nailed in one phrase what I had been fumbling around trying to say for the last five minutes of my session with one client. The idea of the Bluepencil café, of course, was to both give people a sense of what editors do and could do for them (i.e., free samples!) and some feedback on their work from a professional editor. I was mostly able to provide positive feedback, since most of the hopefuls who show up at WoS are already members of a writers group etc. so well on their way to a decent second or third draft. I particularly enjoyed providing feedback to the three or four 18 year olds, since it is very hard for them to get a sense of where they are at, since one cannot trust what mothers and peers think of one's work. Always pleased to see work from the next generation, because gives me a lot of hope and refutes the oft heard assertion that the next generation is illiterate, and so on. Some promising work there. Gives one hope.

The most fun was talking to people interested in maybe joining Editors Canada. Editing is a lonely profession, since most people don't understand what we do and we often work in isolation out of home offices etc, so it was great fun to meet others doing that work locally. We had the associate editor from the local magazine come by, a couple of freelancers, a couple of people who edit theses; and remarkably, an editor who had just this week been hired to start work doing French-English translation for the UN in NY--pretty much the pinnacle of the profession. I've really enjoyed the coffee sessions with the local Editors Canada group, because there is a lot of mutual moral support over difficult clients, obscure editing issues and the general invisibility of the work.

I have also offered to organize proper bluepencil cafés at the library if they'd like to have that as ongoing programming, so we'll see hif they take us up on that. There is a lot of programming for the arts in Lethbridge, but not as much for the written word as one might hope, so maybe we can get something going.

Five Rivers Publishing Given this was a last minute impulse, I didn't bother shipping in boxes of books to sell,just had my personal copies on display. I stupidly forgot the bag with the bookstands, half the signage, etc at home, so the display was not as spiffy as I had envisaged, but even laid out flat on a table, it was a lot of books for a small press, and I was pleased with the effect.I hoped having the "Display Only" signs up would translate to "no pressure here", since I am well aware that attendees often stay 20 feet away from the tables at such events, lest they have to buy something. A number did pick up this or that book (a lot of positive feeback on our covers) and a few took our card and wrote down the titles of books, so that might translate to a few sales down the road.

The table to my right (Champange Books) sold a case or two, making the trip from High River worthwhile; one of her authors was present at the event, so books sold to people wanting to get them signed. In contrast, The table to my left, a group of six who had travelled from a distant corner of BC, sold not a single copy I could see.... That's pretty much our experience of these sorts of events: unless one is already a known quantity, one is not going to sell much of anything. One needs to be part of the readings, etc. to get any audience interest. What might work for the future, is for three small publishers to get together and organize readings in our shared tent. I could see that working. People are more likely to buy one's books if one can get a sample....

SFeditor.ca There is not a lot to display for my own company, beyond a one page sign and some business cards, but a number of people did talk to me about being edited, and if I get even a single client out of those conversations, that would certainly pay for the table and my time there. Although mildly optimistic about a couple of potential contracts, I would be fine if nothing came of it because it was a very enjoyable day, thanks to having a chance to talk to Barb (a former editor with Five Rivers, left now to be a full-time writer), the other local members of Editors Canada, and passerbys (all of whom are, by definition, interested in reading, if not writing and editing).

I cannot speak to the readings or performances at Word on the Street proper, since I was pretty much anchored to my own table the whole time, but others brought reports that suggested the event was a success. The event has certainly grown over the last few years and whatever bugs there were the first year have certainly been ironed out by now. A worthwhile event and one I might well take a table at again next year.

Posted by Robert Runté at 5:49 PM No comments:

Email ThisBlogThis!Share to TwitterShare to FacebookShare to Pinterest
Labels: Lethbridge, self-promotion, Word on the Street

Is it just me, or is this obvious:

Pluto flyby reveals true nature of what we used to think of as our 9th planet.

Posted by Robert Runté at 3:17 PM No comments: