The Dos and Donts of Writing

Karl Johanson, editor of NeoOpsis Magainze, talks about the Do's and Don'ts of writing science fiction at KeyCon. Karl's approach is a refreshing change from the usual 'there is only one way to write' nonsense . . . . 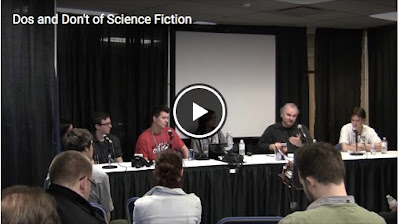 Selecting An Editor (An extra criterion)

I recently asked a photographer acquaintance how business was, and he allowed that it was good, in spite of the recession; but that he was frustrated by the increasing number of incompetents who were opening up shop in town (presumably as they got laid off from the oil patch). It was not that he was afraid of the competition, because his corporate client base was not about to go to anyone else, but that these amateurs gave professional photography a bad name: they'd charge families large sums for bad portraits. "The problem is, anyone with a camera and a month's rent can open a studio. They think because they have an actual camera instead of a phone, that makes them a professional photographer. So they look at what other studios charge and charge just enough less to make them seem competitive. But they have no idea what they are doing, and people pay hundreds for badly composed and badly lit portraits. Their clients could have done better themselves with a selfie on their cells."

Somewhat naively, I suggested that as word got around that this or that photographer was useless, they would go out of business.

"No, you don't get it. Good photographers are often booked months or years in advance, whereas these clowns are always available. There are always people who decide they have to get married immediately, or who forgot to book in advance, and have to take whatever photographer is available. And it's these guys! They're always available on short notice because they're everybody's last choice. But that happens often enough to keep them in business forever! And since they're still there a year, two years later, people think they must be legit."

"Well," I say, "what's the problem? You have more than enough business, so what do you care?"

"Because people look at what these clowns do and think that's professional photography, because they paid professional rates for those photos. So when they hate the pictures, they think photography is a scam and decide not to bother again. There's a whole generation of consumers growing up thinking they can do as well with their phone cameras. My art, what I contribute, is discredited along with the bozos."

And then it occurred to me the same pretty much applies to editing. I constantly see postings seeking editors like this from June 7: "If you are interested and would like to start working today please contact me." My staff (Hey, did I mention I have staff now? I should do a post on that!) are booked through to September at least, and I personally have project commitments to keep me going well into the new year, so I cannot even think about responding to that request. So I can't help wondering, what's the hurry? Whom did that guy expect would have an immediate, out-of-the-blue opening in their work schedule to take on an 83,000 word book project today? (And how fast did they think one could properly edit 83,000 words?) 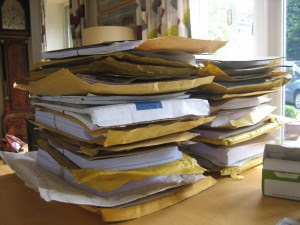 Photo credit   [Not actually my desk: I almost never handle paper manuscripts anymore, but a screenshot of an overflowing file folder on my computer desktop doesn't have the same visceral response....]

I understand that after working months or years on a manuscript, it's natural for an author to want to celebrate by getting it out the door and to the editor. But um. I haven't had an immediate opening on my editing schedule for the past three years, and I only started the business six years ago. So unless someone is brand new, or just had an unexpected cancellation (authors do occasionally drop dead or go bankrupt or give up writing or announce they are going to be two months behind schedule getting their manuscript back to you), I can't help but wondering if we aren't dealing with another case of 'wedding photographer'.

Maybe if one has invested months or years in a manuscript, one should be prepared to invest a little patience in getting their first choice for editor. Or, you know, scheduled editing ahead of time.