My first published drabble (a drabble is a story exactly 100 words long) is up at https://thedrabble.wordpress.com/2019/06/30/pillow-talk/

Writing Drabbles and other types of flash and micro fiction is a good way to 'tighten' one's writing. Editors and agents often say things like, "this is good, it just needs to be tightened up a bit" but it's not always obvious to the author what that means exactly. As I try to edit down my novel by 25% without actually cutting any scenes, paring down my verbose style to something a little 'tighter' is what's required. The discipline of writing a story in a hundred words, or even 1000 words for flash, helps develop the skills necessary to be more concise...

Try it! Harder than it looks!

Posted by Robert Runté at 8:31 AM No comments:

The author often mistakenly believes s/he breathes life into a character by providing all sorts of detail; but in fact it often has the opposite effect: by lavishing attention on the physical description, the author is to that same degree likely to skimp on actual characterization. Eye color does not a character make, because one can randomly (re)assign hair and eye color and not change the character in any fundamental way. (Well, unless these things have special significance in this particular SF&F world, that grey eyes indicate elvish ancestry, or some such...). Characters are generally memorable because of their actions, motivations, attitudes, strengths, flaws—in short, their personalities— rather than eye or hair color. If one's character notes are all about physical appearance, then you're doing it wrong. As we frequently reassure each other, it's not appearance that counts, but what's inside.

Which is not to suggest that one should never provide any detail of appearance or setting; only that one needs to ensure these details are inserted when timely and relevant; that they don't occur as a disruption of the narrative, or in overwhelming quantity (see previous columns, "Common Mistakes #2 thur #4: Less is More).

Posted by Robert Runté at 11:52 AM No comments:

Although the author may have cast the character in a particular way, imposing that one specific actor/description on the reader is unnecessarily restrictive. Yes, the author may have worked hard to picture the scene s/he is trying to depict down to the specifics of hair and eye color, but contrary to the beginner's understanding of the process, the writer's job is not to reproduce that scene in the reader's brain exactly as the author originally pictured it. On the contrary, one wants a certain level of vagueness, of blank canvas, onto which the reader may project their own experiences and preferences. Just as a playwright has to allow for a certain amount of interpretation of the script by the director and actors, the writer has to leave room for the reader to bring something to the project.

For example, if the story features a bully, then it is far better if in the reader's mind that bully merges with that bastard down in accounting who is currently making their life miserable. Of course their conscious mind is not about to suffer any such confusion, since we're pretty sure the guy in accounting is not in fact the murder or king of the space vampires, or whatever; but great fiction, like great opera, often bypasses the intellect and goes directly to the viscera, with people's emotions. The resonance between the writing and the reader's own experience may be disrupted, however, if one insists on establishing definitively that the guy in accounting is not the bully under discussion because the one in the book has red hair and blue eyes.

Or, to take an example from the other end of the emotional scale, if one is too precise in describing the love interest, one runs the risk of including a detail that is, for the reader, a deal breaker. "Electric blue eyes" is as likely to remind them of their ex as of their current lover. (It is the same reason why it seldom pays to be too explicit in sex scenes: if it doesn't happen to be the reader's kink, one is more likely to get an "eewww!" than a sale.)

So why go there? If the writer insists on determining every microscopic detail of the experience for the reader because that happened to be how the writer pictured the scene, then it's not about trying to be precise, it's about being a control freak. If one wants to build readership, one has to give up some control so the reader can take some ownership of the reading experience. If one wants readers to recommend the book to their friends, then the reader has to come to think of it as one of their books

Posted by Robert Runté at 10:40 AM No comments:

The Role of the Editor 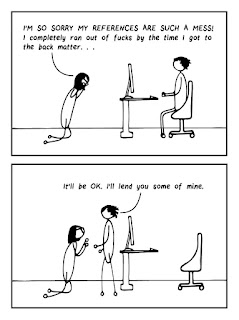 This blog by Iva Cheung provides excellent insight into the writing process for academics/grad students, and then provides the most perfect explanation of the role of the editor I have ever encountered.

Posted by Robert Runté at 10:58 AM No comments:

Canada's freelance editors sing their anthem at the national convention 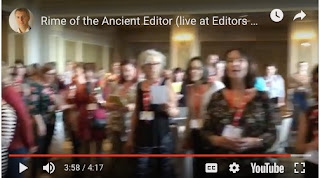 Click here for The Rime of the Ancient Editor

Posted by Robert Runté at 10:19 AM No comments:

Another problem I see a lot is the mistaken belief that one needs to provide a detailed physical description of every character that crosses the page, no matter how minor. Beginning authors seem particularly focused on eye and hair color. Here's the thing: no one cares. No one ever said, "Hey, I bought this great book: it's protagonist had blue eyes. Can you believe that?! It was so great to see that in a book!"

There are three problems with providing too much physical description of characters (and to some extent, of settings).

First, timing. Beginning authors often feel they have to provide the character's appearance immediately upon that character's initial entrance. There is certainly a logic to that, but then what one often gets is expository lump right in the middle of what is supposed to be an action scene. Say an assassin jumps out at our hero: if the author feels compelled to provide a detailed description of what the killer looks like, then instead of the rapid pace of swordplay, gun fire or fisticuffs, the story comes to a complete standstill while we are briefed on disheveled hair, wild eyes, rumpled suit, and so on down to the shoelaces. Interesting as all of this might be, it is less relevant and compelling then the fact the individual in question is trying to kill the viewpoint character.

When police try to debrief an incident, for example, the witnesses are often hard pressed to identify their assailant's hair and eye color and height and so on because their attention was pretty much focused on the fact that they were being assaulted. (Sometimes they remember there was a knife, but the description is usually about and six inches bigger than it actually was.) In the heat of the moment, eye color is pretty far down the list of what people notice; so the reader won't really notice its absence either, if the writer provides sufficient action. What the reader will notice is that description replaced action; that the action ground to an unexpected halt at the precise moment the author should have been building tension.

Posted by Robert Runté at 10:33 AM No comments: 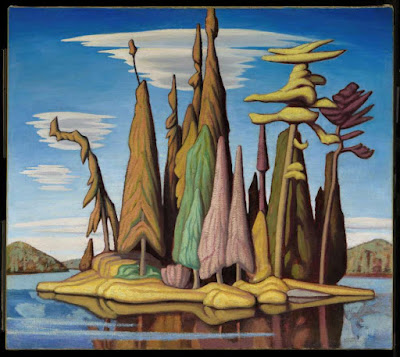 I wrote a 500-word flash piece in response to this painting by Group of Seven artist, Lawren Harris. It was published today in the Spring/Summer 2019 issue of Active Voice, the Editors Canada newsletter.

The story is here if you'd like to read it. If you do, can you see what I saw in the painting?

The story represents a few firsts: I believe this is the first time Active Voice has solicited fiction and poetry from its members; it's my first publication translated into French, and I think this was only my third piece of flash ever.

I have found the discipline of writing flash has been very helpful as I edit my novel down from 166,000 words to something more manageable—say 120,000. Editors often say airily to their clients that the author needs to 'tighten up the writing' but it's often hard to explain exactly what that entails. Trying to write a complete story in 1,00, or 500 words, or a drabble (exactly 100 words), quickly teaches one which words are essential, and which can go. Once one develops the mindset of cutting to core, tightening up our verbose first drafts comes a lot more naturally.

Posted by Robert Runté at 9:49 AM No comments:

Another Essential Editor Publishes this week.

And no sooner had I entered the last post, than another Essential Edits editor has a release: 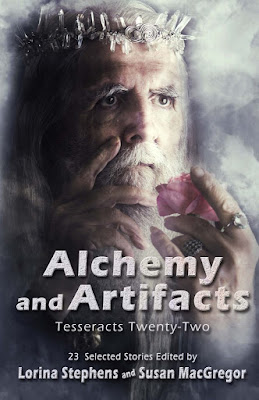 Halli Lilburn has a story out in the just released Tesseracts 22 from Edge Publishing (co-edited by my former boss, Loria Stevens, and Susan McGregor, whose first novel I edited years ago). Halli's story is "Joint Eaters" and she shares the Table of Contents with some very big names in Canadian speculative fiction.

Posted by Robert Runté at 1:19 PM No comments: 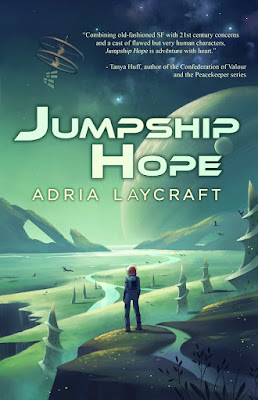 Posted by Robert Runté at 10:41 AM No comments: 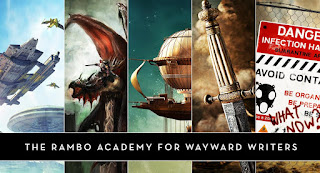 Cat Rambo is a prominent SF&F writer and instructor, so her page of links is actually pretty helpful: LINKS FOR WRITERS.

Posted by Robert Runté at 10:19 PM No comments:

Common Mistake #3 Less is More: Everything

"Less is more" also applies to, well, everything: metaphors, jokes, even surplus characters. I had a manuscript across my desk where a writer used essentially the same line twice within three pages. It was funny and it built up the speaker's character, but you can't get a laugh out of the same punchline twice in three pages; one of them had to go. Later that same day, I was reading another manuscript where the author introduced several characters, spent time describing them, building up their personalities, but then didn't actually have them do anything in the story. They were just sort of there . . . except for one character who sat out the entire story in the barn, and so wasn't even there. Maybe save the barn character for another story . . . Just because you thought of an image, or a metaphor or a character, or a funny line doesn't mean you have to use it. Keep to the point, keep things moving forward, and restrict yourself to your very best material.
Posted by Robert Runté at 10:27 AM No comments:

The late Dave Duncan's website has been hacked...his family has moved the content to a new address: https://www.essentialedits.ca/Duncan/updates.htm

I am editing Dave Duncan's unfinished manuscripts for publication. (He's not done yet!) The first of these releases will be The Traitor's Son from Five Rivers in August 2021.

Posted by Robert Runté at 5:18 PM No comments: 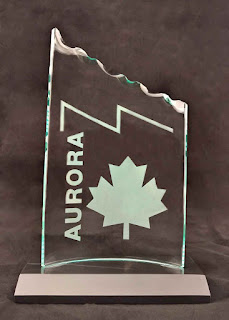 The 2019 Aurora Awards ballot has been announced: File 770 news Very pleased to see TIMEFALL by Alison Lohans, a book I edited for Five Rivers, made the shortlist for best YA novel.

Posted by Robert Runté at 3:23 PM No comments: