Mike Plested "Get Published" Podcast, episode 84, talks about publishing and book promotion. Usually Mike interviews authors and editors on his biweekly podcast, but this time he is the interviewee, talking about his own new book, Mik Murdoch: Boy Superhero. Mike describes the process of writing the novel, shopping it around to publishers, the editing process, and post-publication promotion. I was particularly interested in his discussion of why he chose to sign on with a publisher rather than just self-publishing, and what it was like working with an editor. 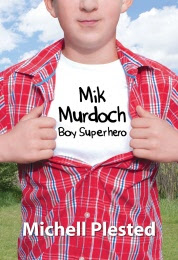 (Particularly glad to hear him say complimentary things about the latter, since I was the editor on this book.)

Posted by Robert Runté at 1:36 PM No comments:

Got yet another person following me on Twitter, in hopes that I will immediately follow back. A quick glance shows me that this individual has accumulated around 8,000 followers...and follows over 8,000 other people. I'm guessing almost all of them are working on the same wrong-headed principle that the more followers one attracts -- the larger that number -- the better one's networking and sales potential. This is completely stupid and an enormous waste of one's energy.

Rule #1: More is Not Better

8,000 followers does not translate to 8,000 network connections. If each of these averages 3 tweets a day, that's 24,000 tweets going past each day. If one is spending one's day reading 24,000 tweets, then one is a professional Tweet reader, not a professional writer. Since one would have to be a complete time-wasting idiot to read all that chatter, you don't. Since you know better than to read all those tweets, who do you think is reading yours?

Time invested in building up a following -- particularly in artificially inflating that figure by using the tricks one read in some self-appointed expert's column on how to use social media to promote one's book -- is consequently a complete waste of time and energy better devoted to improving one's writing or paid output.

If one's tweets attract an audience on their own, then it is remotely possible that those individuals following you are in fact reading you. But following others to get them to follow back, and other such tactics, is just useless.

I am constantly amazed at the number of idiots whose tweet stream is their stream of consciousness."Going for coffee. Gonna have a big cup. Oh Yeah!" Who gives a giant pile of dead leaves? I don't even want to hear this from my wife, unless immediately followed by "Can I get you anything while I'm up?"

Admittedly, there are a few people I follow who are sufficiently witty and provocative that their daily observations are worthy of the 15 seconds of my attention that reading their tweet requires. It's like office conversation, and provides the illusion of having coworkers for shut-ins and isolated writers, but these masters of the trivial are few and far between. The vast majority of tweeters (yes, I mean you specifically) are just wasting their time and their Followers' time by tweeting such minutia. I do not care how much coffee you drink, and if you insist on commenting on it, you're a prime candidate for the next round of "Unfollow"s.

Similarly, I find Twitter's recent change to post tweeters direct messages to others a complete waste of my time. I can't stand tweets like "@whosit: Right on Sister! You tell 'em!" or "RalphM42: More to the left and then up one!" What does this mean? Why would I care? I understand the concept of re-tweeting: passing on news and interesting tidbits picked up from someone else stream is a (potentially) useful networking function. But relaying conversations out of context simply wastes my time. Consequently, I don't follow people whose tweet stream contains a lot of direct comments. People who only occasionally make direct comments to others, and who take care that these comments are intelligible to those outside of the immediate conversation, are more likely to stay on my Follow list, and to be read.

Rule #3 Quantity is Not the same as Quality.

What is required, then, is a few quality tweeters. I follow people who provide useful information on topics that I am likely to need to know about: topics I teach about or write about. There are hundreds of folks out there, for example, who tweet when they read an interesting science article. I follow two or three whose interests appear to parallel my own. By following them, they act like a specialized clipping service helping me to quickly focus in on a few relevant documents, thus saving me hundreds of hours of research.

I try to return the favour, tweeting about resources that I have found useful or surprising that others might not otherwise have come across. If I feel the need to tweet about my daughter's new video on YouTube, I stick "for family and friends" or at least "Family" at the start of the post so everyone else can just skip it.

To sum up: only follow people who contribute directly to your work by providing a stream of useful information. Try to be that person for everyone else.

Rule #4: Don't Use Tweets (or Facebook) for Commercial Announcements

One is permitted to post one tweet when one publishes a short story; two for novels (the second in case someone missed it the first time round). That's it. If one sends out a tweet every couple of hours about sales on this or that title, then one's tweets become nothing but the commercials interrupting the Twitter Stream content, and readers will quickly learn to tune them out.

If you really want to promote your work be interesting. If your followers come to associate your name with interesting stuff, they will be prepped to buy your stories and novels. When I find an author I don't know on Kobo, and they have a good cover and a good tag line, I might think their book is a possibility. I will then go to their blog, or Facebook page or Twitter feed, and if I find there nothing but self-congratulatory commentary on their own brilliance, I realize I have made a mistake and move on. When I found Lindsay Buroker's Encrypted and checked out her blog, it didn't say anything about her books. But it made me laugh out loud in the first two posts I read. Consequently, she made the sale. (And I subsequently wrote a positive review of the book). Stop trying to write ad copy. Write stories and books, and if you have to tweet, write something interesting and worthwhile there too. Or, just don't. <{> Rule #5: No Reruns

I used to just quickly glance at someone's tweets (three or four samples come up when you first click on their name) and think, wow...those are great tweets, I'm going to follow this guy! But you only get suckered a couple of times before realizing there are a bunch of folks out there who develop a list of 10 or 20 or even 30 brilliant tweets, and then just rotate through that list again and again in the hopes that people will follow them. This works well to greatly inflate the number of their followers, but once I see the same tweet a second time, I realize that the individual is a phoney cluttering up my tweet stream with reruns. I can't hit the "unfollow" button fast enough.

Posted by Robert Runté at 11:06 PM No comments: