I often look around for markets for my own short fiction (my novel, obviously, is going to Five Rivers whenever I can get enough time between editing projects to finish the damn thing) and submission guidelines vary from businesslike to um, well, to the ones for Forget Magazine. Funny enough, and flexible enough to almost tempt me to submit something, but I did notice the one thing missing was the mention of any payment, so I am guessing it is a nonpaying market. It's fairly poetry oriented, so that is not entirely surprising: poets have figured out a long time ago that there is no money in writing, so the lack of payment in no way suggests a lack of quality—Forget seems to be attracting top rank poets (I recognize the names of some Governor General award winners, and so on) and it has been around for about a decade, so, you know, a market one has to take seriously. There are short stories and essays too, though, and some of this stuff seems pretty good. I was a bit put off by the explicit rejection in the guidelines of anything featuring spacecats, given that I am at this very moment editing a novel about space cats (Leslie Gadallah's classic Canadian Space Opera, Cat's Pawn, the first in the Empire of the Kaz trilogy, to be reprinted by Five Rivers next December) but it is a market I will definitely look at in the future, their random prejudices notwithstanding. And, no, I don't know why their logo (reprinted above) is upsidedown—just how they roll, I guess.

Posted by Robert Runté at 8:56 AM No comments:

CSFFA Hall of Fame Plaque Presented to H. A. Hargreaves 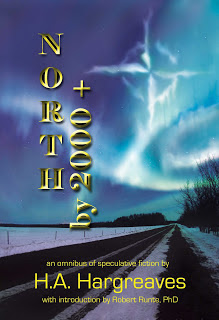 One of the best things I've done since becoming an editor with Five Rivers Publishing, was organizing to have H. A. Hargreaves's pioneering short story collection (the first ever marketed as "Canadian Science Fiction") reprinted. We made the decision to add every SF story he'd written since the original North by 2000 came out in 1976 and so called the new edition, North by 2000+. I wrote a lengthy afterword explaining why Hargreaves' stories were so influential and remain so significant, and also how his Canadian SF was different from the American SF of the time. (Basically, it was the lecture on Canadian SF I had been giving for the previous 30 years, but written down in the same book as most of my examples.)

Lorina (the publisher at Five Rivers) was so impressed with the collection, that she asked to see and subsequently published Hargreaves non-SF collection, Growing Up Bronx —which is an equally wonderful memoir of his childhood, albeit, revealing that the father of a distinctly Canadian genre of SF actually grew up American. 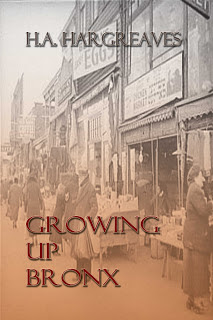 So, it made me distinctly happy to be able to be on hand to present Dr. Hargreaves with the Plaque from the CSFFA inducting him into the Hall of Fame. 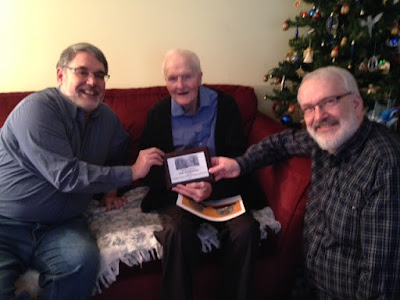 The Canadian Science Fiction and Fantasy Association's Hall of Fame acknowledges outstanding achievements that contribute to the stature of Canadian science fiction / fantasy. Inductees names are inscribed on a two-sided trophy. The two back-to-back faces are in the spirit of Janus, Roman God of doorways, of decisions and of beginnings and endings. They look forward to the future, as much of Science Fiction always has, and back to the past, which is the home of most of Fantasy. The trophy is currently on display at the Merril Collection of the Toronto Public library.

The male face represents the field of Fantasy with elements of Bacchus, Loki and the Green Man in the wild look and secretive, ironic smile. His helmet is the Knight’s helmet of Classical Fantasy. His wild face reminds us of not only the myths and legends that underlie all literature but also of dark fantasy and all of its eldritch children.

In addition, inductees are presented with a personal plaque with the two engraved images of the trophy's faces. In 2015, three authors were inducted into the Hall of Fame for outstanding lifetime achievements: Dave Duncan, H.A Hargreaves, and Micheal Coney. Michael Coney passed away in 2005 and Dave Duncan received his plaque at a ceremony at VCon 41, Vancouver. Dr. Hargreaves, however, was in hospital and could not receive his plague until now. On Sunday, December 7, 2015, Cliff Samuels, CSFFA Awards Coordinator, and Robert Runté, Senior Editor at Five Rivers Publishing and one of five members of the CSFFA Hall of Fame Selection Committee for 2015, presented Dr. Hargreaves with his plaque at his home in Calgary.

Posted by Robert Runté at 10:16 PM No comments: