Attended the When Words Collide festival in Calgary again this year. Last year was WWC's first convention, and I have been writing rave reviews ever since. Indeed, the organizers won a well deserved Aurora Award for their efforts. but I was nevertheless a bit worried that it might have been some kind of fluke. Could they repeat their initial success?

I am here to say that yes, this was once again the best writer's convention since Context'89 (which saw the creation of SF Canada) or, well, WWC last year. Fabulous guests, including Adrienne Kerr, the editor for commercial fiction from Penguin Canada; an amazing number of panels on topics of actual interest to writers; increase in attendees from a cross section of genres; and the convention was the host of this year's Aurora Awards. I was very pleased to see participation from the Writer's Guild of Alberta, and such literary presses as Frontenac House, and Eastern-based presses like CZP and Five Rivers Chapmanry, in addition to the usual suspects from Western Canada.

Five Rivers did very good business at WWC: we officially launched the six titles above at a session on Saturday afternoon; the books sold well at both the launch and in the dealers' room, even selling out of the local authors' books; I negotiated the final details of contracts with two writers signing on with Five Rivers; Mike Plested handed out contracts for the anthology he is co-editing, coming out from Five Rivers; I asked for initial 30 page submissions from four new writers, and a full submission from a fifth; and I spoke on something like 11 panels (five of them intelligently), plus got to be one of the presenters at the Aurora Awards. I greatly enjoyed finding myself between Robert J. Sawyer and Adrienne Kerr (Penguin) on the live action slush panel, for example, and hanging with the editors from On Spec and NeoOpsis magazines, Bundoran Press; finally meeting Colleen Anderson in person; meeting Tina Moreau from Tyche Press; Justyn Perry (Breathless / Lycaon Press), and a dozen others, including my personal heroes, Sandra Kasturi and Brett Savory of ChiZine Publications. I love visiting with Canadian authors, meeting and helping new authors, and especially hanging with other fiction editors. Such an enjoyable and productive weekend! I have already signed up for next year.

There were, inevitably, a couple of minor 'areas for improvement'. One weak point was the banquet. The $40 ticket implied a better meal than I got: by the time our table got up to the buffet, there were significant gaps in the available food and the buffet was held up for half an hour (pushing the rest of the evening's events behind schedule) because the carver was late arriving. The Convention committee has already announced a change of venue (to the much larger Carriage House Inn) so that problem is resolved before I could even raise it.

The other problem was the strange lack of smoozing skills demonstrated by local Alberta writers...do these people know nothing of the larger world outside Western Canada? CZP is legendary for their parties, but when I went, there were like four people in the room. (Admittedly, four of the most interesting people I met at the convention and one of the most entertaining conversations, but still....) Perhaps things picked up later after I had to leave to deal with a family matter, but I get the feeling this was not the usual CZP party. From what I could see, most WWC attendees were crammed into the Edge party, or the steam punk party or the local writers' group party or the consuite. Okay, I get that all four of those parties were next to each other at one end of the hotel, and the CZP party was down another hall all by itself; and I get that people like to get together with their buddies. But come on, people, this was your chance to meet Sandra Kasturi and Brett Savory, the two best editors working in Canada today! You bloody well know everyone at Edge already... go socialize with some Easterners! At least for an hour before going back to your usual cronies. Made me shake my head. As I've said repeatedly, ChiZine Publications has not just fundamentally changed the face of horror as a genre, it is the best small press in the country and a model for everyone else interested in the future of publishing. Fifty years from now, scholars will be studying the flowering of the Chizine school of writing as the most important literary movement to come out of Canada this half century...and Alberta writers couldn't even make it down the hall to meet them? They didn't notice the four out of six nominations for best novel this year were from ChiZine Publications? Hello?! Stop complaining about Toronto's ignorance of events in Western Canada, if when a publisher does make the effort to come out West, nobody can be bothered to go meet them.

End of rant. I'm sure a lot of people did meet and interact with the three ChiZine editors who were there, perhaps at their table in the dealers' room if nowhere else -- it is impossible to walk past their table without stopping to stare at those covers-- but to miss the chance to go to an actual ChiZine party...!

Posted by Robert Runté at 12:04 PM No comments:

In addition to doing freelance development/copy editing, I'm also senior acquisitions editor for Five Rivers Chapmanry. About 18 months ago, I signed H. A. Hargreaves to reprint his classic 70's SF collection, North by 2000 (the first SF collection ever marketed as "Canadian SF".) I wanted the collection because I often give lectures on Canadian SF to English teachers, etc., and often use Hargreaves (especially his, "Dead to the World" story) as the exemplar of Canadian / US differences. In one of my more recent talks, someone had pointed out that if the book had been out of print for 30 years, they could hardly use the story in their classrooms. So I either had to acquire the reprint rights and make the collection available to a new generation of readers, or--you know--update my lecture notes. 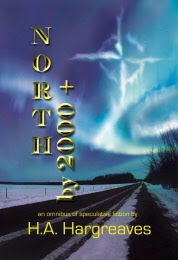 Six months later at the When Words Collide festival (Calgary), I met horror writer Bill Schnarr, and he said, "Hey, I hear you're reprinting Hargreaves' book!" This surprised me because we hadn't actually announced that yet, but Bill went on to explain, "He's a coworker of mine." Turns out that Bill Schnarr is a reporter at the Claresholm Local Press where Hargreaves--a retired English professor -- comes in once a week to proofread the paper. A few months later, Bill signed on with Five Rivers to bring out Things Falling Apart, a phonebook-thick collection of his short stories. I'm sure that part of his decision to go with Five Rivers was because Hargreaves was having a positive experience with the press, but still, kind of a coincidence that two of our writers not only come from the same small Alberta town (population 35,000) but even work in the same office. 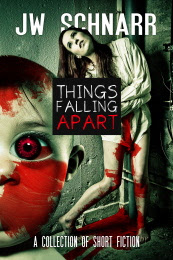 At the same When Words Collide festival I met Schnarr last year, I held a pitch session in which eight or nine author's pitched their novels to me so that I could help them refine their pitches. Out of that number, I actually invited one woman, Susan Bohnet, to submit a manuscript. She did, and after she made some revisions we had requested, I offered her a contract. We then agreed to meet at this year's When Words Collide festival. So, she turns up Friday night at the session I'm hosting with H. A. Hargreaves. And Hargreaves points to her name tag and says, "I know that name. I proofread your column every week." And she confesses that she is indeed that columnist, and that when the editor of the Claresholm Local Press had been away that week, she had handed her column into acting editor, J. W. Schnarr. So you tell me: what are the odds that a micropress based in Neustadt, Ontario would end up with three writers from Clarseholm Alberta who all work in the same office?