Another common mistake I see is beginning authors piling on the images, or metaphors, or reusing jokes. For example, the protagonist will ride his trusty steed into a forest, and the author will start a description of the forest with a nice image of the trees—and then another, and another and another and another until one cannot see the forest for the imagery....[sorry]. What I mean is, the first image will be striking, and the reader will think, "nice image!" and then read another couple of words and find another striking image, and think, "oh wow, another nice image—I can really see it;" and then bump into yet another image and think, "oh, that's, uh, vivid," and then another image and think, "say, this is really quite dense description". By the next image the reader is either getting impatient to get back to the story—which has likely ground to a halt—or going, "wait, what was that about the leaves again?", because one can only take in so many images piled atop one another before hitting sensory overload. The more images stacked up, the weaker each one becomes. One cannot emphasize the leaves and the trunks and the branches and the roots and the piles of dead leaves and the moss and the ants and that deer over there and the way the sun glints through the trees and the way the pattern of light dapples the forest floor and keep on to cover the entire ecology of the forest...because if everything is emphasized, nothing is.

Or, to put it another way, while it might have taken the writer three days to shape that description of the forest, and so had time to savor each carefully crafted image, the reader is going past at a 1,000 words a minute. Okay, maybe if you're Proust or James Joyce, readers will slow down for you, but, um, you're not. Not yet, anyway. So less is more. Out of the ten images you've come up with, pick the best one; prune the rest. This will usually make the scene—and your writing—leaner, tighter and so much better.

Same with metaphors, jokes, and even surplus characters. Had a manuscript across my desk yesterday where a writer used essentially the same line twice within three pages. It was funny and it built up the speaker's character, but you can't get a laugh out of the same punchline twice in three pages; one of them has to go. Later that same day, I was reading a another manuscript where the author introduced several characters, spent time describing them, building up their personalities, but then didn't actually have them do anything in the story. They were just sort of there...except for one character who sat out the entire story in the barn, and so wasn't even there. Maybe save the barn character for another story.... Just because you thought of an image, or a metaphor or a character, or a funny line doesn't mean you have to use it. Keep to the point, keep things moving forward, and restrict yourself to your very best material.

Posted by Robert Runté at 8:52 AM No comments:

Most common mistake I see is authors starting the story way too early. They need to start with 'initiating incident', the thing that makes today different from yesterday for the characters. Starting with the 'before' picture does NOT work, because before was ordinary life and we do not want to read about ordinary life because we are living our own ordinary lives, thank you very much, and we bought the book for a taste of something different. Start with the action scene, start with the characters under threat and keep them under threat as the action and tension builds...no one wants to read their backstory, at least not in the first 50 pages.
Posted by Robert Runté at 10:24 PM 2 comments:

I was googling for something else this evening and came across this post from SF Canada blog for November 5, 2012. I don't think they'll mind my reposting it here: 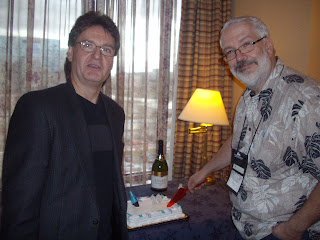 World Fantasy Convention 2012 was hosted in Toronto, Ontario Nov. 1-4, where SF Canada members restated their 1992 corporate charter to approve continuance into the new Canada Not-for-profit Corporations Act. Shown here wielding a ceremonial blade is Dr. Robert Runté from the University of Lethbridge, one of the founding members of SF Canada, along with current president Steve Stanton.

SF Canada was founded at ConText89, so that makes it 24 years old. I was one of the instigators, writing to every SF author in the country to attend the founding meeting, and it worked pretty well, with about thirty authors showing up and signing up. Candas Jane Dorsey was elected the first President, and I think I was Secretary. I ran the newsletter, anyway. It took a couple of years after that to get incorporated, but it has worked out pretty well. I highly recommend SF Canada to any authors in the fantasy, science fiction or speculative fiction genres.
Posted by Robert Runté at 9:11 PM No comments:

Not everyone can afford an editor, so knowing how to edit one's manuscript oneself is crucial. But Lamb also makes the point that even if one can afford a professional edit before self-publishing or submitting the manuscript to a traditional publisher, you get more for your money if you can edit out the obvious mistakes before hiring a professional:

There are many editors who charge by the hour. If they're spending their time fixing blunders you could've easily repaired yourself, you're burning cash and time. Yet, correct these problems, and editors can more easily get to the meat of your novel. This means you will spend less money and get far higher value.

I was sufficiently impressed by this article that I followed it back to Lamb's personal blog which also turned out to be pretty good. Funny and insightful, even though I don't always agree. But enough to make the input useful. Check her out.

Posted by Robert Runté at 9:20 AM No comments: