A Good Month for My Fiction 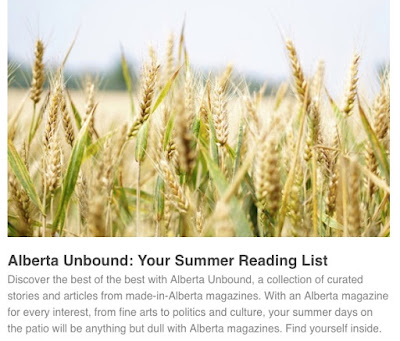 After coming in second in the Hummingbird Prize, I got more good news today: my time travel story, "Sermon on the Mount" was selected by On Spec Magazine to showcase the magazine in Alberta Unbound, the Alberta Magazine Publications Association online exhibit. The exhibit only lasts a couple of months, but you're welcome to read my story for free while it lasts.

Posted by Robert Runté at 7:10 PM No comments: 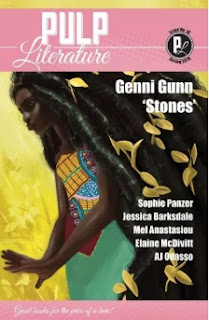 The Current Issue of Pulp Literature
.

Very pleased that "Day Three", my second-ever piece of flash fiction, came in second in Pulp Fiction's Hummingbird Flash Fiction Prize. I believe the story will appear in the Winter 2019 issue.

I am particularly pleased because getting published in Pulp Literature was one of the five writing goals I set myself for this year. Getting X number of stories written for the year was goal one, of course, and two was to see if I could get something published/sold each month (so far, four out of six, but still time to catch up), and the third was to finish polishing the novel and approaching agents—I'm lined up for a session with an agent in three weeks—fourth was selling to Pulp Literature; and fifth was writing an article for University Affairs, which is on my agenda as soon as I finish teaching for the year.

Posted by Robert Runté at 9:51 AM No comments: 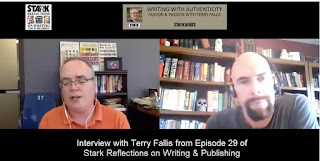 Fabulous interview by Mark Leslie Lefebvre with Terry Fallis about going from self-published writer, to Stephen Leacock Medal winner, to bestselling author with one of the world's largest publishers. Terry talks about writing a novel no one was interested in publishing (a satirical novel about Canadian politics--well, duh!) but nevertheless reached the audience he needed to reach.

If you don't have time to watch, do what I did and listen to the audio podcast at the link included. It has the advantage that you can listen on your headphones as you do the dishes or vacuum or walk the dog, so you get two things accomplished in the time for one. Also, the audio version includes 15 extra minutes of Mark's commentary on HIS writing life, in this case, excellent advice on how to keep from being overwhelmed by too many writing projects or being discouraged when you (inevitably, in my view) fall behind self-imposed deadlines.

My favourite Fallis advice to writers from the interview—something I've also been telling students and clients for years—is not to chase trends:

For crying out loud, write something that you care about. If vampires are all the rage right now, don't write a vampire novel because of that. If you love vampires, by all means. But I remember meeting a writer, an aspiring writer, and she said, "Yes, I'm writing a novel about vampires because they're so hot now". (In the rise of Twilight.) And I said, "Oh, do you, are you interested in vampires?"
"No, not really."
"Do you know much about them?"
"No, not yet. But I'm just researching them now."
"Do you know any vampires?"
"No."
"Are you a vampire?"
"No."
"Are you touched in any way by vampires?"
"No."
So I could only imagine the challenge it would be to write a book that feels real, and powerful, compelling, authentic, when there is no connection at all between the subject matter and the writer, beyond the marketing imperative of the high profile of vampires at that moment in time.
So when people would say,"Why would you write a politcal satire of Canadian politics, that sounds like a terrible idea," and maybe it was, but at least it was something I cared about, and knew about, I'd lived in that world, I had some views on it and I had a story I wanted to tell to illuminate a different path we might take in how we practice politics in this country. And I think it's hard to write your best work when you're not writing about something that you care about.

I've seen this again and again: writers chasing a trend. Even those talented enough to write something half-way decent are wasting their time because by the time their book is ready, the market has been flooded by copycats, and the trend is over. Any book you can write fast enough to cash in won't be good enough, and any book that's good enough will take too long to write, have edited, go through the submission/or self-published process to appear while the trend is still there. The only authors who were able to cash in on Twilight's success, were those who already had a really fine vampire book in their bottom drawer before vampires were hot.

Similarly, there is no hope of predicting what the next big thing will be to get ahead of the curve—would you have expected Canadian political satire, for example? And even if you could predict, it still has to be something to which you actually have a connection. Certainly, every genre editor can spot when a mainstream writer has decided to "knock out a genre novel" on the grounds of "how hard can it be" and reinvents every cliché that died out 50 years ago—or worse, believes an SF or Romance novel has lower standards. No thanks!

The whole interview is awesome because Mark is a great interviewer and has known Fallis forever, certainly before Fallis was known outside of Hamilton, and because Fallis is a fascinating guy with an unusual career path. (And for older writers like myself, it's encouraging to know you can still make it as a writer after age 35.)

I'd also recommend Mark Leslie Lefebvre's Stark Reflections on Writing and Publishing for not just this episode, but as an ongoing series. Mark was the founder and former director of Kobo's Writing Life program for independent authors, was a long-time bookseller and one of the first to install an Expresso Book Machine in Canada (i.e., print-on-demand before anyone else had heard of POD), and is an established author himself. He has an insider's knowledge of both traditional and self-publishing, and extensive experience as a bookstore manager. So...yeah, you need to be listening to this if you want to understand what's happening in the industry.

Posted by Robert Runté at 1:24 PM No comments: