Strangers Among Us Book Launch 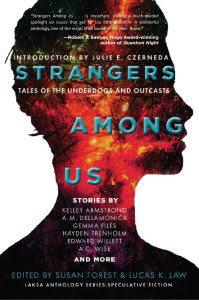 The Strangers Among Us: Tales of Underdogs and Outcasts anthology book launch at When Words Collide was the most moving I have ever attended. Instead of doing readings, each author was asked to speak to where the idea for their story had come from. The authors all related personal stories of encounters with mental wellness issues: PTSD; lifelong anxiety; chronic depression; the suicide of a son; the death of friend.... It wasn’t just the authors who struggled to get through this portion of the program without crying. 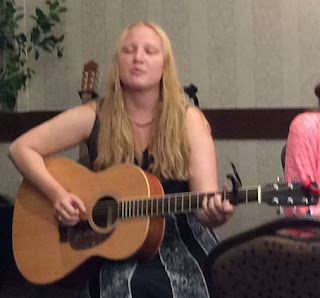 A specially commissioned song, written and performed by Vanessa Cardui, was included as an intermission between author statements. Achingly beautiful, the song was about coping with ongoing thoughts of suicide. Putting poetry to music does not lessen the impact of saying these things out loud; on the contrary, the song cut right through the brain directly to the emotions. (Vanessa and her friend performed a second painfully wonderful song later in the program depicting the downward spiral of alcoholism.) Then more author stories.

I presume they placed me last to speak because they knew my story in the anthology is about toasters not trauma, and had decided that having me go last might provide a bit of buffer between the emotionality of the event and returning to the convention outside. That might have worked better if I were not myself having a bit of difficulty holding it together, though in my role as listener rather than as speaker.

It wasn't all doom and gloom. (Photo: Bev Geddes)

Door prizes were distributed, announcements made, thanks said, and everybody went home.

Of course, the major takeaway is that in any group of 10 people, 9 of them will have some deep connection with mental health issues. (10 out of 10 if you count ‘denial’ as an issue. See “The Missing Elephant” in Playground of Lost Toys for my shortcomings...) I should say that the anthology itself is actually surprisingly optimistic. I don’t want to leave the impression that this is a cover-to-cover tear-jerker. Far from it. Just as the immediacy of the launch event was something else entirely. So honoured to be included in the anthology, and so glad to have been able to make this very memorable and touching launch.

Posted by Robert Runté at 9:25 PM No comments:

As mentioned previously, I am one of the Guests of Honour at When Words Collide Festival this year. In contrast to my limited participation at Limestone Genre Convention in Kingston (see previous post) I'm pretty booked at WWC, so thought I'd post my schedule in case any of the topics are of interest, and also to show typical workday of a GoH at writers' conventions.

Note that the Friday AM Masterclass is a 3 hour workshop that requires prior registration and a small fee in addition to membership in the WWC convention; the Five Rivers pitch sessions are free to convention members but require signup for a time slot on first come, first served basis; Festival Guest readings, Book Launches, the autograph session (8-10 Saturday), and the merchant's room are open to the public; all other events are restricted to registered WWC attendees. 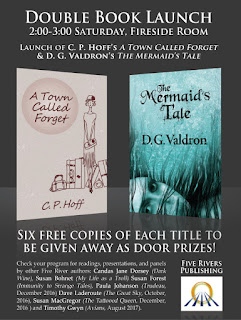 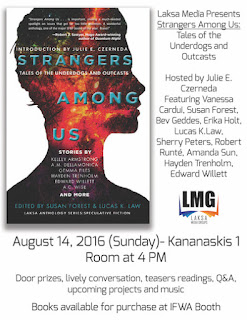 So I make that out to be 21 scheduled events for 28 hours over three and a half days. So toss in putting in an appearance at the after hours parties and the usual convention socializing, and that's pretty much full on for the whole convention. Which is as it should be, and pretty much what I would be doing anyway if I were not a GoH, because I love all this stuff.
Posted by Robert Runté at 8:44 AM No comments:

Because I'm based in Ontario for the next six months or so, I was able to attend Limestone Genre Convention in Kingston this year. A newer, smaller convention, it was quite the change for me because I was only on a single program item (a pitch session for Five Rivers) and I only knew half a dozen people there. Which turned out to be great because it forced me to meet new people and to listen to people I hadn't heard before on panels, rather than me being the one who was pontificating. (Well, okay, I couldn't totally resist pontificating anyway, so 'contributed' from the audience whenever they asked for questions from the floor, but mostly the structure and moderators were able to restrain me.) So as a consequence, I learned a lot! Listening will do that!

As is often the case, smaller convention translated out to 'more intimate' and I was able to actually meet and talk at length with a number of people I had never encountered before or only corresponded with through email. This was great, because I discovered a number of self-published Canadian authors I hadn't know existed, and who turned out to be fabulous. For example, I was totally impressed by Jen Frankel who in turn insisted I go hear Kit Daven's reading, whose books I had bought on Kindle before she even finished her reading. I've met Suzanne Church before, but always a pleasure to see her in action, and Marie Bilodeau did a great performance, and Derek Kunsken was fabulous moderator on his panel and Derek Newman-Stille was as insightful as ever, and on and on with so many great people. Brandon Crilly and Ira Nayman were people I knew but never met. So many great conversations, and new authors for me to read.

The pitch session for Five Rivers went well, introducing me to many local authors who were not normally in my catchment area. A couple of promising things there.

I really enjoyed the panels and learned a lot, again because I was hearing opinions from people I don't usually hear at conventions out West and a lot of what they were saying was new to me. After going to some of the same conventions for 40 years, I've heard a lot of the same people over and over and pretty much know what they are going to say before they say it, but that was definitely not the case for me here. And sitting in the audience instead of on the panels, I interacted a lot more with my fellow attendees and particularly with younger writers. I got to ask these youngens a lot of questions about their writing and publishing and --that whole listening instead of pontificating thing--learned a lot. I like to think I'm on top of trends, but um, instead of following what is happening, I think I got a glimpse into what is coming down the road for the future as I heard very different attitudes from a lot of these kids than I'm used to with the people I usually work with. Brave new world / exciting times if half of what I was hearing reflects widespread attitudes among the next generation of writers.

Of particular revelation was the panel on fanfiction. Look, I have my copy of Mirror Mirror (probably the first piece of modern fan fiction) and my daughter is big into Victor Hugo fan fiction, and I've been working on a paper on Lynda Williams and her encouragement of fan fiction in her universe, so I thought I knew a little about the topic, but oh my god was I out of touch with current trends. So exciting! So hopeful about the future of writing. (Hey listen, my day job teaching in the Education Faculty to students who no longer read has been incredibly depressing--I mean, if your kid's English teacher doesn't read for pleasure, let alone write or publish, what the hell hope do we have? So re-discovering the world of fanfic on the scale it now exists, hell yes, I'm excited!)

So hat off to Liz Stranger and her crew for organizing a great convention. Well worth attending for anyone within range next year.

Posted by Robert Runté at 7:16 AM No comments: