Morgan ‘Bamboo’ Barnes, Star Pilot of the Galaxia (flagship of the Solar Brigade), accepted an hors d’oeuvre from the triangular-shaped platter offered to him from the Princess Qwillia—lavender-skinned she was and busty, with two of her four eyes what Barnes called ‘bedroom eyes’—and marveled at how on her planet, Chlamydia-5, these snacks were called ‘Hi-Dee-Hoes’ but on Earth they were simply called Ritz Crackers with Velveeta.

Within the smoking ruins of Keister Castle, Princess Gwendolyn stared in horror at the limp form of the loyal Centaur who died defending her very honor; “You may force me to wed,” she cried at the leering and victorious Goblin King, “but you’ll never be half the man he was.”
============================

The contest has deteriorated a bit in recent years to short, self-contained jokes, but they do still illustrate several principles of bad writing. Things not to do.
Posted by Robert Runté at 7:21 AM No comments:

Blog entry on publishingby Edmonton author Krista D. Ball reads as if it were written by me, so might as well include it here.
Posted by Robert Runté at 8:05 AM No comments:

quote of the week

Also good interview with M.J.Rose at A newbie's guide to Publishing on going independent....
Posted by Robert Runté at 12:57 PM No comments:

Email ThisBlogThis!Share to TwitterShare to FacebookShare to Pinterest
Labels: self-publishing

I've had to raise my rate for appraisals: I've found that many of the submission packages coming in were taking a lot longer to respond to than I had anticipated, so I've needed to adjust the rate accordingly. At $90, it's still no relation to my hourly rate, but I can't raise the initial appraisal much higher or it defeats the purpose. The new rate is also more in line with other reading services...given that I have a two to three months backlog as it is, I don't need to undercut the competition; and I'd rather people were choosing SFeditor.ca because they trust my judgement, not just because I turned out to be the cheapest editor on the block....

I'm not too worried about the rate increase cutting into business since anything under $100 is still just the price of an evening out. If an author doesn't believe in their work enough to invest $90, pretty sure they weren't going to be long term customers anyway.

My hourly rate remains the same though, since that was already set at industry standard.
Posted by Robert Runté at 1:26 PM No comments:

I know I go on a bit about the importance of book design, especially for self-publishing and micro-presses which often seem to overlook this important step in the process, but here's a book that takes typography in our genre seriously. 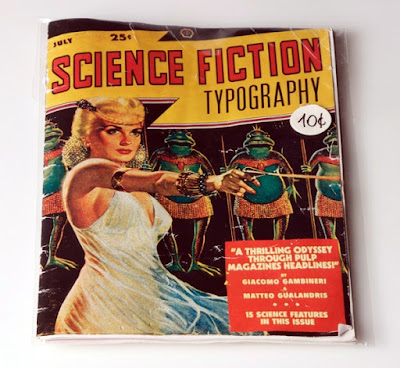 Science Fiction Typology has also got to be an example of publishing for a niche market. I can't see any of the large corporate publishers going for a book like this, because let us face it, this is not the stuff of mass market, but for those interested, how cool is this!
Posted by Robert Runté at 6:45 AM No comments:

Thanks to Peter Halasz for bringing to my attention that the long-awaited, much anticipated 3rd edition of the Science Fiction Encyclopedia has been announced: http://www.sf-encyclopedia.com/
Posted by Robert Runté at 8:22 AM No comments:

Quote of the month:

I do spend a lot of time on my crits, but I've found out all the crits I've done, most of them will help the writer in their next book and not in the book they have for critting.