Why one needs copy editing... 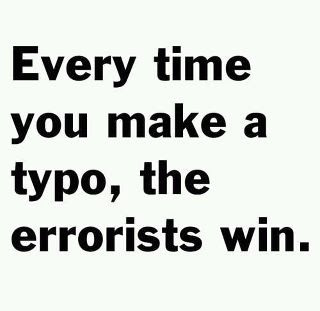 Posted by Robert Runté at 8:10 AM No comments:

I love the title of Krista Ball's column, ﻿﻿I don't have a muse, I have a deadline.
Posted by Robert Runté at 8:23 PM No comments:

Interview with me and two other authors from the Tesseracts 15 anthology at Totally Tesseracts blog as part of Tess 15 launch.
Posted by Robert Runté at 9:43 PM No comments:


The Friends of the Merril Short Story Contest will be open to entries as of Nov. 15, 2011. There are 3 monetary prizes to be won: 1st place $350 (CDN), 2nd place $100 (CDN) and 3rd place $50 (CDN). Winners will also have their fiction published both on the contest website and in a limited edition hand crafted booklet (5 copies – 1 to be archived in the Merril Collection, 1 to be retained by the artist crafting the booklets, and the others to be distributed among the winners). We are accepting only original, previously unpublished Spec Fic (SF/F/H, Magic Realism, Slipstream, etc.) short fiction of up to 4,000 words. The hard deadline for submissions is Feb. 15, 2012. International entries are welcomed. All subs are judged blind. There is an entry fee of $5(CDN).


Entrants are encouraged to visit http://friendsmerrilcontest.com for a full set of entry rules, contest FAQs, and other contest related information and updates.
Posted by Robert Runté at 9:59 AM No comments:

How to name your first novel

a mildly amusing Monkey See post on How to Name Your First Novel
Posted by Robert Runté at 12:06 PM No comments:

Highly entertaining article on cheating at university The Shadow Scholar: The man who writes your students' papers tells his story. Well worth a read.

This is, needless to say, not a service provided by SFeditor.ca. And why the blurb on editing theses and dissertations emphasizes "ethical" assistance. So far, no one has asked me to help them cheat, so not a problem with which I've had to deal.

I am somewhat sympathetic to the article-writer's position that the profs who get these falsified assignments deserves them, since they are the product of bad assignment structures, poor assessment practices and a lack of proper help to students who need it. As I teach my student teachers, if they use authentic assessments, students won't want to cheat because it will be about the learning, not the grade; if they are providing formative assessments, they will be coaching students through the process, so they will know something is up if the paper that is handed in is not the one that was in process for the three weeks before; and if they are using properly designed rubrics, the sort of inflated rubbish they get from these bought papers won't pass muster. And, if universities were serious about stopping students using these services, cheating would have negative consequences for the cheaters rather than for the professors who report it.

But it is fascinating to think that that so many of these papers pass through the system without a blink. So many out there with credentials they don't deserve, certifying competencies they don't have.

My favourite term paper story is the student who handed my own term paper into me. I'd written it ten years before as an undergrad, and when another student approached me and asked if he could borrow it -- because I'd gotten an "A-" whereas he'd gotten a "C" and he wanted to see what he had to do to get an "A" next time -- I said sure. Apparently my "friend" had photocopied it and put it in his fraternity's term paper file, where it had, apparently, had a long and prosperous career as a paper in that course. Since the course was almost always taught by grad students, and that grad students only teach the course once before graduating themselves meant that the rapid turnover prevented anyone from seeing the paper twice. But then I was a grad student teaching that course and suddenly had the strangest sense of deju vu reading a student paper -- but being the compulsive hoarder I am, I actually had copies of all the papers I've ever written back to Grade 9, so I pulled mine out and sure enough, this was it.

My favourite dissertation story I only have second hand: A colleague told me that when he was in seminary he had attended a dissertation defence, his faculty using the public defence model. Apparently the appointed External on the committee had suffered an attack of appendicitis and been unable to attend at the last minute; but to the supervisor's delight, had recommended the leading German authority on the topic, who by complete coincidence, happened to be attending a conference in the neighbouring city. It had been a simple matter to contact him and have him add a short extra jog to his trip to Canada to attend the defence. The problem of course came when the newly appointed external arrived, opened the dissertation and discovered it was his dissertation. The miscreant had found his unpublished dissertation and translated it from the German, thinking, what were the odds of anyone on his committee ever finding an unpublished dissertation in another language? Again, the irony of a seminarian cheating to become a qualified man of god is hilarious; but the coincidence of the original external getting sick and being replaced by the one guy on Earth who could call it looks to me to be the direct hand of god! Mysterious but hilarious ways! Made for, apparently, a highly intense defence since the external made the point of announcing his find at the public portion of the defence, lest, I assume, someone tried to cover it up. Spectacular end to that career, I would think.
Posted by Robert Runté at 9:16 AM No comments: