Great interview with Sandra Kasturi, Co-Publisher, ChiZine Publications, on Jim Harrington's excellent Six Questions for..." blog. I particularly loved the discussion of cover letters and synopses which is the clearest statement of the typical errors people make and the clearest direction for how to do them properly I have yet read.
Posted by Robert Runté at 9:05 PM No comments:

Managed to finish initial structuring of SFeditor.ca. Still need to add content, but the general outline is there. Not bad for a week's work over lunch hour while teaching full time.

I also started editing a new manuscript for Five Rivers this week, and am responding to a resubmission from a couple of months back. Which makes three manuscripts on the go for a period I had intended to have 0 so I could concentrate on teaching. I have another manuscript coming in August 1, and two more for review (as opposed to editing) came in yesterday. I'll try not to take anything else on for August, as I will need family time and vacation before university starts up again in Sept.
Posted by Robert Runté at 11:45 AM No comments:

Thanks to the revolution in publishing technology, it is easier than ever for people to find a print-on-demand (POD) publisher, or an e-publisher, or to self-publish. Self-publishing has the obvious problem that one can't really know if one's book is worthy without objective third party review — and even then, there have always been great books that went on to great commercial success after being rejected by 47 editors.

And, unfortunately, there have always been truly terrible books that have been published by 'editors' at vanity presses.

In the old days, vanity presses were slowed down by the fact that actually printing copies of books cost money, so it was fairly obvious when the publisher asked you, the author for the money, that you were dealing with a vanity press. (Legitimate publishers pay the author, not the other way around.) Lots of still people got sucked in, but most could be warned away by friends and family.

Now, with epublishing requiring very little money (or talent) upfront, many more individuals have set themselves up as epublishers. Some of these are legitimate publishers with high standards putting out excellent product; especially those who also do POD. Five Rivers Chapmanry would be a good example of an excellent print-on-demand publisher who also puts out e-editions.

Others, not so much:

This is not to suggest, I hasten to add, that I have something against Christian SF. There are plenty of great Christian SF authors (Donna Farley comes to mind), but these titles are not promising.

But publisher Chris Fayers does have standards! Here, quoted from Chris Fayers' twitter feed: "Now is a great time for the unpublished! We will publish your fiction! Just make sure it has commas and full stops and that sort of thing." In another tweet he says "I had a book in the other day which had no paragraphs, not even at the end of chapters. The author said she was not computer literate." Well, okay then! Sentences! Paragraphs! Where else in epublishing will you find that kind of demanding expectations?!!

Remember Fanthorpe readings? Where aspiring authors would sit around at writing workshops taking turns reading selections from Fanthorpe's (he wrote under a number of pen names) books aloud because they were so appallingly bad it gave everyone in the room encouragement, on the grounds if this clown could get published, anyone could.

(If you are not familiar with the Fanthorpe phenomenon: he had a contract to produce a book a week back in the early 1960s, the publishers' only requirements being that (a) the manuscript be typed and (b) that the manuscript be exactly 109 (or whatever, I forget the exact number) of pages long... Fanthorpe managed the first requirement because his mom operated a typing school: he would walk up and down the rows dictating his novel aloud to the students, and then put the manuscript together from the best typed pages. Not a lot of editing and revision going on there! He managed the exact page requirement by stretching out or cutting short the final scene based on feedback from the typing students over how close he was to the last page. In one memorable case, the hero takes three pages to turn the doorknob to open the door to reveal the final scene because Fanthorpe had three and a half pages to go. Memorable writing, I tell you!! I actually have a pretty fine collection of Fanthorpe because they are incomparable works! Thankfully.)

Patricia Backora and some of the other authors sold at ebooksforpleasure, are, I'm guessing, the new Fanthorpe.

I also love that these books appear to be sold only through "http://www.ebooksforpleasure.com/bookstore/sci-fi" because one of Chris' tweets says "Authors, don't get lost on Amazon, we are looking for new fiction" which suggests to me that these books aren't even sold on Amazon....

==========
A correction from Donna McMahon (author of Dance of Knives and second childhood) :
OK, I just have to make a few corrections here. Lionel Fanthorpe wrote pulp novels for Badger Books (in England) in the 50's. He was in his early 20's at the time. They wanted 50,000 words, so he would write to 50,000. If there was still plot happening at 49,000, he'd come up with a deus ex machina and wrap everything up; if he was running short, he'd pad. "I say, Fred, this alien invasion problem reminds me of the Punic Wars...." And then the character would deliver three or four pages of description of the Punic Wars. He also made extensive and creative use of the thesaurus. He dictated his books and they were typed up by his mother and sisters. Nobody, including Fanthorpe, is sure how many books he wrote since they were all under pseudonyms, but the figure cited is that he was averaging a book every 12 days. The sheer, raging ridiculousness of them spawned a small but dedicated fandom.

Two of these fans are Paul and Debbie Cross, who run a bookstore in Portland, Oregon. They used to hold regular Fanthorpe readings at Orycon back in the 1980's. One night about 2 am, Debbie's phone rang. She answered it and somebody says "This is Lionel Fanthorpe calling." She said "Oh, yeah, sure," and hung up. But he phoned back, and it was indeed Mr. Fanthorpe, who'd done his time zone arithmetic incorrectly. He said he'd heard that the convention featured his books and he wanted to attend. And there ensued much trepidation--would he expect people to take his books seriously? (This being before the internet, there was really no information to be had on him.)

Well, the Reverend Lionel Fanthorpe (he's an Anglican clergyman) turns out to be a charming, funny character with a great sense of humour. He's every bit as eccentric as you might imagine--he's into paranormal research, martial arts and UFOs and hosted a British TV show.

You can enjoy some of his Badger book covers here: http://krustelkram.blogspot.com/2009/11/lionel-fanthorpe-badger-book-cover.html

His style is rather well captured in this short excerpt: 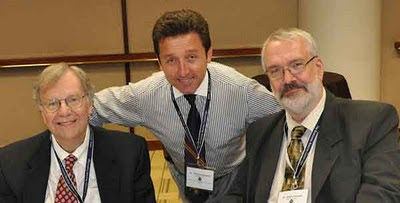 I won't normally talk about my day job in this blog, but I got to be one of two keynote speakers at this conference, which was an interesting experience for me -- liked being in such elevated circles! At first glance, an education professor giving one of the keynots at a business conference may seem odd, but I was talking about the "assurance of learning" process, which is a hot button issue for business schools these days. I also presented a paper on my research on professional workers, which I co-wrote with my wife, who is a business prof. It was a very enjoyable conference, with some great discussion. Even the banquet was exceptionally good -- better banquet food than I usually get at Education conferences, though this conference was at the Beverly Hills Hilton, so you sort of had to expect great food and service.

Anyway, thought I'd show you what I look like on the job, for once.
Posted by Robert Runté at 1:44 PM No comments:

Email ThisBlogThis!Share to TwitterShare to FacebookShare to Pinterest
Labels: research

Started setting up my new SF Editor domain, though won't actually be launching the service any time soon. I already have a backlog of manuscripts for editing, so do not need to solicit any more for the time being, but wanted to start planning and building the site for when I am ready to ramp up the business -- say in 8 years when I retire from university.

I've been talking about this for awhile, so time to put money where mouth is. Publisher Lorina Stephens has been encouraging me for quite some time to start marketing my services, as we've discussed our vision of the future of publishing and the need for, and potential role of, freelance development editors. Final push came from editing Paul Lima's new book on freelancing -- reading his chapter on how to run the numbers got me thinking about how I really could turn this into a viable business. Well, we shall see.

In the meantime, I will slowly be developing the SFeditor.ca website.

(and that's SFeditor.CA, not .COM. SFeditor.com is Gail Mallimson, a San Francisco film editor.)
Posted by Robert Runté at 9:33 PM No comments: