Another common mistake I see is beginning authors piling on the images. For example, the protagonist will ride his trusty steed into a forest, and the author will start a description of the forest with a nice image of the trees—and then another, and another and another and another until one cannot see the forest for the imagery....[sorry]. What I mean is, the first image will be striking, and the reader will think, "nice image!" and then read another couple of words and find another striking image, and think, "oh wow, another nice image—I can really see it;" and then bump into yet another image and think, "oh, that's, uh, vivid," and then another image and think, "say, this is really quite dense description". By the next image the reader is either getting impatient to get back to the story—which has likely ground to a halt—or going, "wait, what was that about the leaves again?", because one can only take in so many images piled atop one another before hitting sensory overload. The more images stacked up, the weaker each one becomes. One cannot emphasize the leaves and the trunks and the branches and the roots and the piles of dead leaves and the moss and the ants and that deer over there and the way the sun glints through the trees and the way the pattern of light dapples the forest floor and keep on to cover the entire ecology of the forest...because if everything is emphasized, nothing is.

Or, to put it another way, while it might have taken the writer three days to shape that description of the forest, and so had time to savor each carefully crafted image, the reader is going past at 300 words a minute. Okay, maybe if you're Proust or James Joyce, readers will slow down for you, but, um, you're not. Not yet, anyway. So less is more. Out of the ten images you've come up with, pick the best one; prune the rest. This will usually make the scene—and your writing—leaner, tighter and ever so much better.

Posted by Robert Runté at 10:24 AM No comments:

Here' the cover of The Group of Seven Reimagined: Contemporary Stories Inspired by Historic Canadian Paintings. 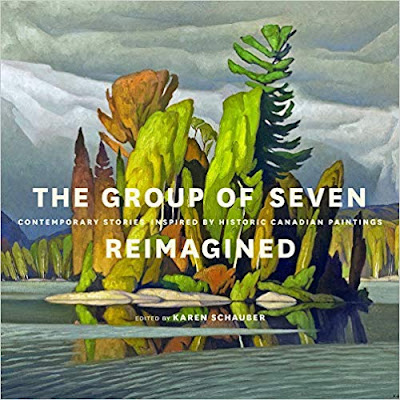 The hardcover book is available now for pre-order on Amazon.ca

I'm really pleased that my speculative fiction piece, "Iceberg" is in here: it's an honour to participate in such an important project, marking the anniversary of the Group of Seven, and to share a table of contents with such a great lineup of authors. Feeling a bit like this means I have finally "arrived"! Can't hardly wait until the book is actually released in October, and I get my copy.

Posted by Robert Runté at 10:39 PM No comments:

Common Mistakes I See in Fiction Manuscripts #1: Starting Too Soon

The most common mistake I see is authors starting the story way too early. They need to start with the 'initiating incident', the thing that makes today different from yesterday for the characters. Starting with the 'before' picture does NOT work, because 'before' was just ordinary and readers do not want to read about ordinary life. We are all already living our own ordinary lives, thank you very much, and we bought the book for a taste of something different. Start with the action scene, start with the characters under threat and keep them under threat as the action and tension builds...no one wants to read the characters' "Before" story, their backstory, at least not in the first 30 pages.
Posted by Robert Runté at 10:21 AM No comments:

As a follow-up to the wildly successful, oversubscribed Live Action Slush panel at WordBridge 2019, I've been writing a weekly column for the WordBridge Facebook page on the errors I most commonly see across my desk as Senior Editor at EssentialEdits.ca. It occurs to me to re-run those here as well. Three of the most common mistakes have already been mentioned on posts here, but that was several years ago, so worth repeating.

But I'd like to start by pointing out that all these "errors" are just things I'm asking you to consider in your writing, not hard and fast rules that must be obeyed. These are common errors because they are things that beginning writers (and sometimes veterans) often do without thinking, but if you have in fact thought about why you're doing this or that, and it's important to your vision, then go ahead and do that. It's not my job as an editor to dictate how you write your story. Just as there is no secret formula for great writing or commercial sales (note: those are usually distinct categories) there is no universal formula for things not to do. For every "common error" covered on a live-action slush panel or in this column over the coming year, one can point to awesome counterexamples in critically acclaimed and/or commercial fiction.

Take, for example, "expository lump": an information dump in the middle of the story where the author stops the action to explain how the science works in a science fiction novel, or how magic works in a fantasy novel, or police procedures work in a detective novel, or provides historical backstory in historical novels, or whatever. For most authors, getting the expository lumps out of their manuscript instantly raises it to the next level, because expository lumps usually interrupt the action, defuse the tension, and distract the reader. Do you really want to read a six-page essay on the fake science behind how warp drive works or do you just want to hear Kirk say, "Warp factor 5" and get on with the action?

But having said that, Robert Sawyer—the most commercially successful and award-winning Canadian SF writer ever—has very consciously laced all his books with chunks of exposition. In his case, that's not a bug, that's a feature. Of course, his exposition is better written and integrated than most, and his identification, interpretation and working out the implication of various scientific developments is what draws Sawyer's fans to his books. Declaring the exposition in his books to be 'lumps' and something to be excised would be completely missing the point and commercial suicide.

The difference is, Sawyer knows what he's doing and why he's doing it. If you haven't thought about where you're putting in the exposition and it's just kind of happened as you were writing the first draft, then looking at the checklist of common errors and asking yourself, "did I just do that?" might be a useful part of revision.

Let me start this column, then, by referring you to an excellent article by Xandra J., "The Absurdity of Publishing" (https://blog.usejournal.com/the-absurdity-of-publishing-8c9e141adaf9) that refutes just about everything that you're likely to hear at a Live Action Slush panel or in the coming installments of this column. Xandra riles against the sort of advice I'm about to give you with the complaint that "Advice for novice writers treats readers as though they are inept children with the attention spans of goldfish." Yep, that's about right, if authors take the errors checklist too literally.

For example, when I first posted on another blog about not making the mistake of piling on too many images at once, I got a pretty strong backlash from a group of poets. Well, um, no, wasn't addressing those remarks to poets who have carefully crafted a series of images and are on the 16th draft of their poetry chapbook. I was talking to someone looking at the first draft of their action-adventure novel and asking if a two-page description of a sunrise is really how they want to try to hook the reader.

Context and vision are everything, and no universal rule of writing exists. Indeed, great writing may require breaking some of the rules some of the time. For every five authors I have to edit down the bloat, I have one who needs to expand every scene so it's not just in their head but on the page. Any "common errors" discussion is about checking to see if you are making that mistake without really understanding why that could be a problem; but if you know what you are doing and why you're doing it for this scene in the context of this story, then, yeah, go for it!

If there is any advice I think might actually be universal, then it is these three points:

Posted by Robert Runté at 10:05 AM No comments:

Why I Am Not a (Total) Prescriptivist 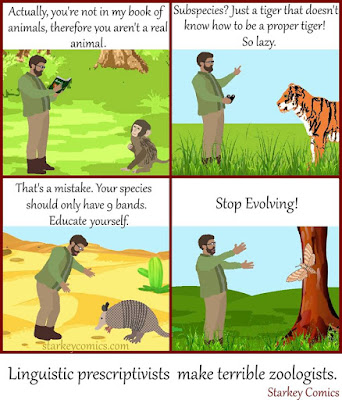 Posted by Robert Runté at 7:42 AM No comments: