There was a restaurant on a bridge.

I suppose I should back it up a little. When my marriage broke, I was living in The Pas. It was hard then, coming back every day to an empty house. I used to leave the lights on when I left for work in the morning, just so that it wouldn't be dark when I came home.

Eventually, after a long while, I met a woman in Winnipeg, and we started to date. It was long distance. There was a seven hour drive to get to Winnipeg. I travelled when I could, and on those long lonely rides, I would listen to the radio. That's the lonely period in my life when I made friends with the Vinyl Café, when I got to know Dave and Morley and Sam, when I listened to stories about Wong's Scottish Meat Pies, and their genial Italian neighbor, and all the rest.

I found that there were Vinyl Café books. So one day, for breakfast, I took my sweetheart out for breakfast on the Restaurant on the Bridge.

That itself was the sort of thing that Stuart would have loved. The Restaurant was a local Icon slash Boondoggle. It had been the brainchild of Winnipeg's first openly gay Mayor. Part of a city core redevelopment project, some effort to make the city special and interesting. Now, if you're thinking, 'Restaurant on a bridge, that might not be a good idea.' Well, you'd be right. A restaurant isn't an ordinary construction, you had to run special water lines, and sewage lines, and grease traps out there, and suspend them in the air, to endure 40 below Winnipeg winters. You obviously couldn't park on the bridge, so everyone coming there actually had quite a walk. Space was at a premium, the kitchen was way too small for a proper restaurant.

In the end, once they built it, nobody wanted it... Restauranteurs, I mean. Eventually, the only party that was willing to take a chance was the Salisbury House. Itself a local institution. Salisbury House, so the story goes, were started in the 1930's, by the former employees of a bankrupt circus who needed to make a living. They served sandwiches, burgers and fries, simple ordinary breakfasts to simple ordinary folk. It was successful, within a few decades, there were Salisbury houses all over Winnipeg. It was part of the character of the city, a defining attribute. Eventually, Burton Cummings, one half of the Guess Who, and a famed musician in his own right would buy into it, a Winnipegger himself, coming home.

The city wasn't thrilled with the Salisbury House on the bridge. They wanted something more upscale, more haute. But the humble sandwich shop was the only one that would touch it, so they got it.

Which is how I came to go there with my sweetheart, for a Sunday morning breakfast of pancakes and sausage. And which is how I came to pull out the Vinyl Café, and in my best imitation of Stuart's stentorian tones, read to her the story of Sam and his friends and a chemistry set.

That became our tradition. Breakfast at the Sals on the Bridge, watching the river stretch out before us, reading aloud the adventures of Dave and Morley and their neighborhood. The staff got to know us, the waitresses would sometimes hang close, listening in. We gave Vinyl Café CD's to our parents, we attended the shows. We even found an old metal children's chemistry set box to keep our collection of books in.

Then one say, the staff told us this was their last day. They were closing. We found other places to have breakfast. Other books to read out loud to each other.

It was at a chicken chef, reading the Vinyl Café out loud that I finally broke down and cried like a baby after my father's long battle with cancer ended.

Stuart, and Dave and Morley were there through some pretty dark times, and some good times. Stuart shared in my healing, and my grief, in loss and love. I'll remember Stuart for lazy mornings, and milkshakes and pancakes, reading out loud, his voice in my head, watching a lazy brown river. Whatever was going on, they were a touchstone.

Den Valdron is the author of The Mermaid's Tale, from Five Rivers, and The Greatest Unauthorized Doctor Who Films.

Posted by Robert Runté at 10:22 AM No comments:

Dave turned off the television.

He thought for a long time.

For once, Morley was at a loss for words.

Robert Dawson is a professor in the Department of Mathematics and Computing Science at St. Mary's University and the author of countless stories and poems.

Posted by Robert Runté at 2:36 PM No comments: 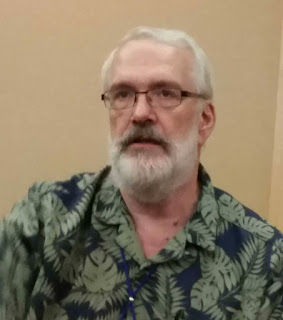 The When Words Collide writers' conference (held each August in Calgary) has a podcast page on which they release Guest of Honour speeches, panel discussions, and interviews. These are generally well worth a listen.