More Effective Use of Social Media

I was just handed a lesson on social media by my Faculty's communications officer, so I thought I would share it with SFeditor.ca readers.

I retweeted someone else's live tweet partly because I was in a hurry (I was on a panel right after the awards ceremony) and but mostly because retweeting someone else's tweet felt somehow (i.e., irrationally) less braggy.

There was not a lot of response to this tweet, but tweeting about the award again seemed, you know, worse than braggy. I don't like Twitter streams where people keep repeating announcements about their upcoming books or whatever, so didn't want to be that guy. But on the other hand, really DID want to adveritze that I had received the award, and no one seemed to have noticed my first (re)tweet.

When I got to work Monday, I thought I should mention to the Faculty's communications officer that I had received an award on the weekend, because we're supposed to, and because I thought there was a chance she would put that in the Faculty Twitter feed. And she did, but here's how she tweeted about it:

So, deconstructing here, she grabbed a picture of me from her files, slapped that onto a powerpoint slide; looked up the paper to grab a suitable quote for the target audience (i.e., Faculty of Ed students and faculty), used a couple of different typefaces, and ta-da! Since she had this out within an hour of my telling her, that's that max time she could have spent on it, but I'm guessing she had other more important stuff to do at the same time, so probably a lot less.

I've tweeted text I have thought worth quoting, and announcements, and I've tweeted photos, but um...feeling bit stupid that it never before occurred to me to make a custom slide to combine the interesting quote with the announcement on a strong visual.

Well, duh! This is freaking awesome!

And the result of her tweeting this on Faculty stream was a wave of new twitter followers on my twitter feed....

So from now on, any time I send out an announcement, I'm figuring out some kind of interesting tag line, and putting it out as a visual.

My apologies if this is obvious to everyone else, but thought I would share a lesson learned.

P.S.: My faculty's communication expert is Darcy Tamayose who is herself a published author

Posted by Robert Runté at 11:03 AM No comments: 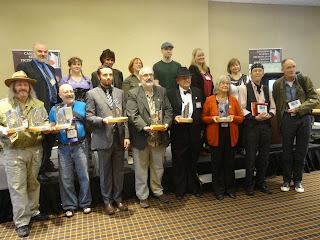 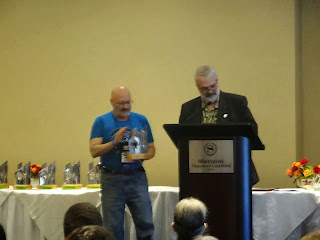 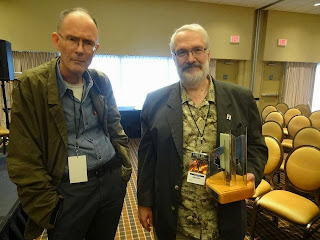 Posted by Robert Runté at 1:47 PM No comments: