Is there money in self-publishing?

A well researched report reported in the Guardian newspaper reports that

Despite the splash caused by self-publishing superstars such as Amanda Hocking and EL James, the average amount earned by DIY authors last year was just $10,000 (£6,375) – and half made less than $500.

Self-publishers who received help (paid or unpaid) with story editing, copy editing and proofreading made 13% more than the average; help with cover design upped earnings by a further 34%.

Note that the 'average' (i.e., mean) was highly skewed by a handful of high earners. The mode was closer to $500 and a quarter did not earn back their costs. One should probably start with the expectation of making less than $500 on one's first book...

I do know self-published authors who are making a living, though. Krista Ball comes immediately to mind, since she is also one of my favorite authors. But she had a long term strategy and really works at both the writing and marketing...Nobody could say she had found a get-rich-quick scheme. If you're in writing for the money, I think you're in the wrong business. There are a lot easier ways to make a living. But if you're in it for the love of writing, yeah, you have a shot at making...$500.

It only makes sense to seek professional editing if one amortizes the cost over not just one manuscript, but over one's whole career—what one learns from having one's first book edited should show up as a better first draft of #2, and getting #2 edited teaches you how to write book #3 and so on. Editing gets less expensive as you go because your manuscripts start out cleaner, and so take less time to edit. That's theory, anyway. Doesn't always workout that way--being creative, authors can always come up with new ways to screw up a manuscript. But I for one like to think of myself as an educator as much as an editor for any particular manuscript.

Essential Edits at Word on the Street Sept 23 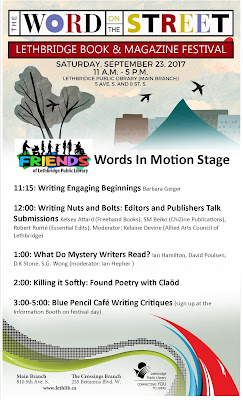 Essential Edits will be engaged at Word on the Street Lethbridge in three ways:

There's lots going on, and it's all free.
Posted by Robert Runté at 4:23 PM 2 comments: