A couple of interesting papers on peer review for our academic clients.

The first lists the sort of problems unprofessional reviewers present for authors
https://www.sciencemag.org/careers/2020/04/how-tell-whether-you-re-victim-bad-peer-review:

The second is a research paper on how unprofessional reviews harm women and minorities more than CIS white males:
href="https://peerj.com/articles/8247/

Posted by Robert Runté at 5:20 PM No comments:

The Worst Fantasy Novel Ever

Interesting video on the worst fantasy novel ever. 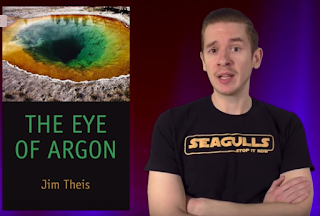 Dominic Nobel on the Tragic Story of the Worst Fantasy Novel Ever.

As an editor and writing coach, I often use examples of what not to do in my workshops, but I have always tried to alter the example sufficiently so they are no-longer identifiable even to the author, should they happen to be in the audience; or I make up examples out of whole cloth—it's usually simple enough to come up with a composite that's no one but everyone.

Although now largely out of fashion, I remember when Lionel Fanthorpe novels were considered the worst SF ever written--which, given pulp origins of the genre, is saying a lot. Fanthorpe readings were frequently used as opening inspiration at writers' workshops on the grounds that they were so bad, listeners would be reassured that if Fanthorpe could get published, then surely anyone at the workshop could also. I certainly found Fanthorpe readings inspiring and have a small collection of original Fanthorpe novels which I pick up from time to time to reassure myself that I am, indeed, not the worst author ever.

I feel Fanthorpe's early novels were fair game because he was blissfully unaware that anyone was making fun of his books until he turned up at a Worldcon decades later with an actually pretty good fantasy novel and was flabbergasted that anyone had ever heard his name before. He dismissed those 180 (or so—I don't think even he knows for sure how many there were anymore) novels from the 1950/60s as the contracted processed cheese they were intended to be. His contract was to turn out a book of exactly 148 pages to match the cover he was allotted, and so sometimes his endings were a little drawn out or a little abrupt depending on how far from, or close to, the 148-page limit he was getting. His early works deserve mockery and admiration in equal measure (let's see you grind out a book a week) and he never thought of those books as other than a beginning job he held before going on to become a school teacher, headmaster, church minister, TV personality, and actual author (books on theology, education, and a popular mystery series co-authored with his wife). If you look Fanthorpe up on Wikipedia etc, he turned out to be an uber-cool guy, so, he can take it.

I think Fanthorpe readings have ultimately fallen out of fashion because, with vanity self-publishing, new nominees for worst science fiction or fantasy novel appear hourly. By 'vanity self-publishing', I mean those authors who self-publish their first draft novel without the benefit of editors or beta readers, and who have no interest in grammar, spelling, critical feedback, self-reflection, or getting better. They often knock off a new novel in their self-referential series every few weeks. These people are defined by their ego rather than quality writing or story-telling. Vanity self-publishing has given the general category of self-publishing a bad name. Legitimate self-publishing authors--those who put real effort into multiple drafts, pay for professional editing and professional cover artists and so on--now refer to themselves as 'independently published' to distinguish themselves from the great unedited masses. I believe in self/independent-publishing and much of it is good and some of it is great. But there is no challenge any longer in finding titles that are so terrible they are unintentionally self-satires or to call into question the efficacy of the entire enterprise of modern schooling.

The above video, then, reminds us that critiquing these horribly-written novels is too easy and maybe not something we should be doing. Let us all take the pledge not to consciously bully anyone. Instead, let us recognize that while much self-publishing or fanfiction or etc is terrible, at least a percentage of these authors will likely strive to improve and a percentage of those may become quite good, and a percentage of those may become excellent, ultimately producing a thousand new great authors we might not otherwise have. I am somewhat encouraged by Krista Ball's comment that the same 12-yr-old male trolls she argued with on Readit some years ago have matured into senior teens now arguing on her side for grammar, growth and diversity. So...let's search for the best books, not the worst.

Posted by Robert Runté at 2:12 PM No comments:

My flash "fiction" (*cough cough*) piece, "The Novice Instructor" is available at Page and Spine in their "Reading Lamp" section.

Posted by Robert Runté at 3:08 PM No comments: