Common Mistake #23: The Difference Between Omniscient POV and 'Head-Hopping' 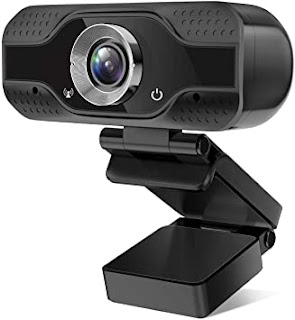 A question that frequently comes up is “what do you mean by ‘head hopping’?” so let’s talk about the difference between ‘omniscient’ point of view and ‘head-hopping’.

A rough analogy with film would be omniscient POV is voiceover narrating the action… like color commentary watching a football game or described video over a battle scene. The camera’s always a little distant from the action so the reader can see everything happening at once. This contrasts with third person POV, where the story is told from one character’s point of view at a time. It’s placing the camera on one character’s helmet, so we see what that character sees, but only what that character sees and from that perspective. (With first-person POV, the camera is behind the character’s eyes, and we have a mic inside there so we hear that character’s thoughts too.) Head-hopping is where the story is written third-person, but the director keeps cutting between helmet cams so we see this part of the scene from character A’s point of view, and then this part from character B’s POV, etc. It can be done (you’ve seen it in a few movies) but…it’s almost impossible to pull off without making the viewer/reader dizzy. So…basic advice to anyone not currently in the million-seller category: don’t even think about trying it. It will suck.

It is way easier to stick to a single character’s pov so that your readers come to empathize with that character, adopt that character’s perspective, become engaged with the story. Switching too frequently throws the reader out of Character A’s story, which (a) becomes confusing for the reader to figure out whose head they’re seeing this from at this moment, and (b) interrupts Character A’s story. If I was invested in A’s story, interrupting that not only throws me out of A’s POV but out of the story itself. That is, the reader stops reading and picks up the next book on their ‘to be read’ shelf.

On the other hand, it is okay—often advantageous—to have different POV characters in alternating chapters. That allows you to have two different perspectives, each with their own motivations, goals, frustrations, etc, but sustained enough to keep the reader engaged and committed to that character in that chapter. Alternating chapters means you can leave each character on a cliff-hanger as you pick up the action with the other one—but moving the story forward so you can skip the boring bits in each character’s storyline. You’re not head-hopping because each chapter is only from one POV and a sustained storyline to which the reader commits. Some writers can do this with scenes within chapters, but I don’t recommend it because, again, really hard not to screw up.

The most manageable book to write is the single POV. Readers identify with that POV character and become engaged, invested. Omniscient can too easily become distancing—too much emphasis on longshots without close-ups, too much reliance on color commentary rather than the reader watching the action and figuring stuff out for themselves, and way, way too much risk of the omniscient narrator switching from showing to telling. Omniscient POV lends itself to expository lumps—and unless really careful, the writer slips into telling us the book’s outline rather than showing us/writing the story. Whereas, all you have to keep from breaking the ‘show don’t tell’ rule with the single (first- or third- POV) is ask yourself “what is my character seeing at this moment”, “how do they know that”, and “would they be thinking about that NOW?”

So nothing inherently wrong about omniscient, and you probably read others doing that all the time, but the % of my clients getting it wrong is way higher than those who go third- or first-person. My advice is always to keep it simple, manageable, and go third-person, but one’s mileage may vary.

But there is no question that head-hoping is almost always a fatal flaw. It almost always represents a lack of command over POV, and editors will stop reading the manuscript the first time it happens. As a reader, I’ve only encountered a single published book in the last twenty years that had head-hoping, and I ended up throwing it across the room, and looked askance at other books from that publisher from then on, because the editor should have caught that was happening and fixed it.

Posted by Robert Runté at 1:28 PM No comments:

I am honoured that editor Janna Liggan nominated my story, "Weathering" for a Pushcart Award as one of the six best of the year in Lamplit Underground Magazine. 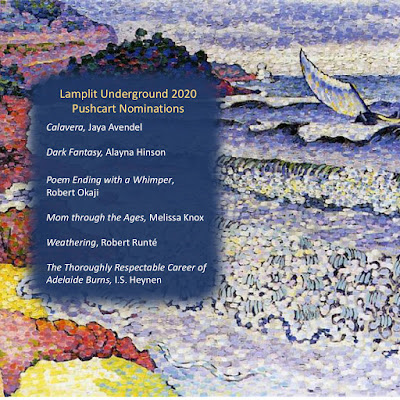 The story is free to read at https://online.fliphtml5.com/dnitz/jtai/#p=12

Posted by Robert Runté at 11:56 PM No comments: