The Life of An Editor

So...my 11 year-old is having trouble getting to sleep one night, so I offer to sit with her until she is asleep. I bring my computer so I won't be bored and so she can't talk to me when she should be trying to get to sleep. And I'm doing my email, because that's the sort of not-having-to-concentrate work you do when you're in a dark room waiting for your 11 year-old to finally fall asleep, when I get an email from horror writer JW Schnarr...which I open to see this: 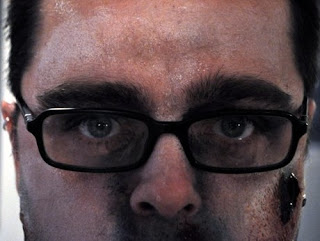 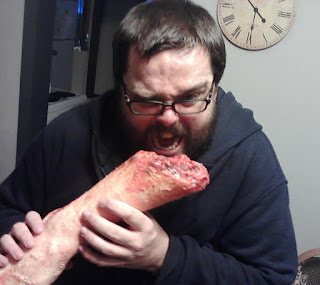 ...which not something you want your 11 year-old to see last thing before she goes to sleep, particularly since you're there because of the potential monsters under the bed. I yank the computer screen to face the other way before she sees it, and of course that motion causes her to sit up and ask what is wrong and etc., and I'm trying to think of how to explain why there is a man eating a leg on my computer screen, when I realize she has a sleep mask on and couldn't have seen anything anyway.

I calm her down again, and then turn to replying to Schnarr's email. My problem is, I had asked Schnarr to send me a photo for a poster I was doing for Five Rivers Publishing featuring a number of authors, Schnarr included, because he had objected to my using this photo: 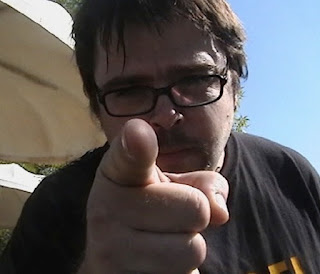 Now, I had assumed he vetoed this one because it was too aggressive, particularly in a poster featuring the smiling, approachable head-and-shoulder photos of the other authors. But apparently I was completely wrong, and he had objected because it was too tame. I forgot that horror writers do not see the world quite like you or I.

So, I wrote back saying that he had perhaps misunderstood the purpose of the poster, which was to help attendees at the When Words Collide Festival recognize Five River authors to make them more approachable, and not, as he apparently believed, a wanted poster to scare people away. I further explained that sending me such photos as I sat with my afraid-of-the-dark 11 year-old was counter-productive, vis-a-vis getting her to sleep. To which he replied:

Definitely not "calm down and go to sleep, there are no monsters" material.

My daughter was brought up on a slightly different strategy. The "Yes there are monsters, and they are hiding under your bed waiting for you to get up or make some noise, so they can drag you away into the darkness..." strategy.

Worked like a charm! My kid NEVER got out of bed!

I should clarify that Schnarr is in reality one of the nicest guys I ever met, and I've met his daughter who seems a well-adjusted, creative teenager.

JW Schnarr will be at When Words Collide Festival, Calgary, August 14-16, 2015, along with six other Five Rivers Publishing authors and two 5R staff.