My keynote address at Academic Conference on Canadian Science Fiction and Fantasy June 8, 2013: "Why I Read Canadian SF: The Social dimension of Reading" has been shortlisted for an Aurora Award. (an abstract is available at http://www.sfeditor.ca/Why.htm.)

Also pleased to see Susan MacGregor's The Tattooed Witch, a book I acquired and edited for Five Rivers Publishing, nominated for Best Novel! (Other novel nominees are Robert Sawyer, Gay Kay, Julie Czerneda and Chadwick Ginther, so one hell of an impressive crowd).

So that's the second year in a row that one of the books for which I was editor has made it to the Aurora ballot. (Mik Murdoch: Boy Superhero was nominated last year in the Young Adult Novel category, but lost out to YA giant, Charles DeLint.)

And although not one of the books I edited, I was also pleased to see another Five Rivers book on the Young Adult Novel short list: David Ladroute's Out of Time.

And Susan Forest, another Five Rivers' author, is nominated for short story category.

So four nominations in four categories for Five Rivers. Not a bad year at all (and that's only the SF line!)

Posted by Robert Runté at 11:00 PM No comments:

I will be going to When Words Collide in Calgary again this August. I'll post my schedule at the convention closer to the dates when times have been confirmed, but it looks like I'll be doing close to 10 sessions. Key among those will be the Book Social for Five Rivers Publishing (in my other hat as 5R Senior Editor) where we will be launching all six of Five River's spring releases. 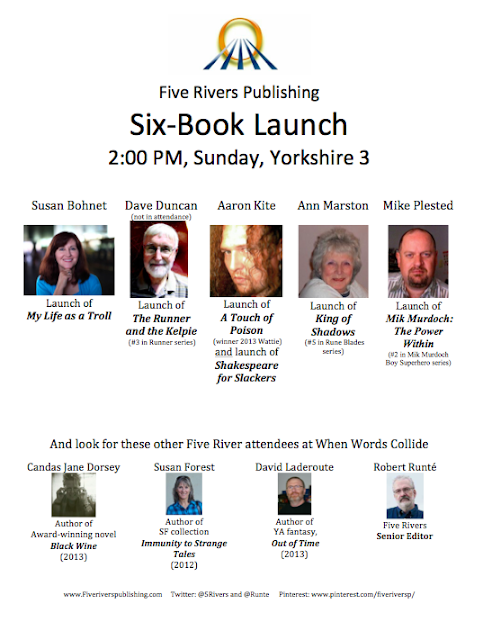 I will also be doing a 'pitch' session where people can pitch their books to Five Rivers, and I'll provide feedback on how to improve their pitch, in addition to screening for manuscripts 5R might be interested in. Interestingly, one of the books being launched at WWC this year is indeed a book that was pitched to me three years ago at the first WWC.

I highly recommend When Words Collide to any writer (or serious readers) who can get there -- I consider it the finest writers convention in Western Canada, certainly the best for anyone working in commercial genres of SF/Fantasy, Romance, Mystery, etc., but even poetry, canlit and screen plays have been well represented in the past.

Posted by Robert Runté at 2:40 PM No comments:

I have been tagged by Joe Mahoney in a Blog Hop.

As a recording engineer for CBC Radio, Joe has recorded, mixed, and created sound effects for more than one hundred radio plays ranging from The Muckraker to Margaret Atwood’s The Handmaid’s Tale to Mordecai Richler’s Barney’s Version. Joe has also written radio plays (The Cold Equations, Captain’s Away!), produced them (Steve the Second), directed them (Canadia: 2056) and story-edited entire series (Steve the First, Steve the Second, Canadia: 2056.)

As a writer/producer, Joe has been a finalist twice for the Aurora Award, Canada’s top science fiction award (for Faster Than Light with Robert J. Sawyer and Six Impossible Things with Nalo Hopkinson) and won a Mark Time Silver Award for Best Science Fiction Audio Production of the Year 2005 (for Steve the Second). Joe is also a published author with several plays and short stories under his belt. He is also darned near finished his first novel.

These days when he's not writing he works as Manager of Digital Production Maintenance for CBC Radio & Television and lives in Whitby, Ontario with his wife and two children.

These are Joe's questions to me: 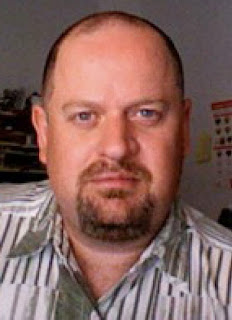 Michell (Mike) Plested is an author, editor, blogger and podcaster living in Calgary, Alberta, Canada. He is the host of several podcasts including Get Published, (2009, 2011 and 2013 Parsec Finalist), the SciFi/Comedy GalaxyBillies (Hitchiker’s Guide to the Galaxy meets Beverley Hillbillies) and Boyscouts of the Apocalypse (Zombie horror meets boyscouts), a part of the Action Pack Podcast.

His debut novel, Mik Murdoch, Boy Superhero was published August 1, 2012 and was shortlisted for the Prix Aurora Award for Best YA Novel. The sequel, Mik Murdoch: The Power Within, is due out August of 2014. 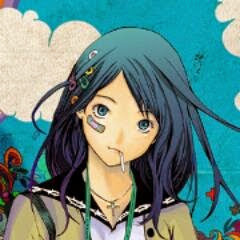 Michael Matheson is a gender-fluid Toronto (the Canadian one) writer, poet, editor, anthologist, and book reviewer. A Managing Editor (CZP eBooks) with ChiZine Publications, and a Submissions Editor with Apex Magazine, Michael is editing three anthologies for 2015 (Start a Revolution, Exile Editions, Spring 2015; This Patchwork Flesh, Exile Editions, Fall 2015; The Humanity of Monsters, ChiZine Publications, Fall 2015). Michael's own fiction and poetry are published or forthcoming in a number of venues, including Ideomancer, and the anthologies Chilling Tales 2, Dead North, Fractured, Future Lovecraft, Masked Mosaic, and more. The in depth interview on Michael's writing process raises a number of significant issues for readers and writers.

Posted by Robert Runté at 1:09 PM No comments: